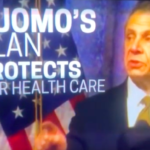 The payment is described in a side letter to the July 16, 2018, agreement between 1199 SEIU and the League of Voluntary Hospitals and Homes, which bargains on behalf of dozens of non-profit health care providers in the New York City area.

Citing a surplus in the National Benefit Fund, which provides health coverage and other benefits for 1199 members, the letter redirects up to $145 million from the fund to several union-affiliated organizations. Among them is the Healthcare Education Project, which is known for its politically charged ad campaigns in New York and other states. The HEP’s share of the money was not specified.

The letter adds a new wrinkle to the story of last year’s Medicaid rate increase for hospitals and nursing homes, which the Cuomo administration designed in part to subsidize the 1199 contract. The move delivered hundreds of millions in additional funding to some of the governor’s most important political allies, and biggest donors, in the heat of an election year.

Earlier in 2018, the Healthcare Education Project had spent $3.5 million on TV ads pushing for Albany lawmakers to defend the state’s health care system from threatened cuts to federal aid. At the time, Cuomo was proposing to establish a special fund, using proceeds from the sale of the Fidelis Care health plan, to hedge against cuts in Washington.

The Legislature approved the concept and gave the governor wide latitude on how to spend it. That fall, shortly before Election Day, he used much of the funds to finance the Medicaid rate increase – despite increasing signs of a looming multi-billion dollar deficit in the Medicaid program.

Around that time, the administration secretly delayed $1.7 billion in Medicaid payments – a maneuver that shifted the cost from one fiscal year to the next and spawned a budget deficit now estimated at $3 billion to $4 billion.

Founded in the late 1990s as a joint effort of 1199 and GNYHA, the Healthcare Education Project is registered with the state’s Joint Commissions on Public Ethics as a subsidiary of 1199 SEIU Labor Management Initiatives Inc. Its original funding was diverted from what was then a surplus in the union’s pension fund – although the fund’s financial condition deteriorated in later years.

One of its lobbying representatives is Jennifer Cunningham of SKD Knickerbocker, who has been known as one of Cuomo’s closest political advisers and worked on some of his earlier campaigns.

According to tax filings (excerpted here), the National Benefit Fund covers a total of 152,000 people, including 41,000 retirees. In 2018, it collected $1.5 billion in contributions from employers and paid $1.7 billion in benefits to members.

In addition to the $145 million for the Healthcare Education Project and other groups, the July 2018 side letter allocated $75 million from the NBF to the union’s National Pension Fund and up to $6 million to “further subsidize NBF costs for nursing homes and St. John’s Riverside Hospital.”

The three-year labor deal signed in July 2018, effective Oct. 1, provides for 3 percent raises in each year. The employers’ pension contribution was increased from 11.25 percent to 12.6 percent of wages. The deal also increased employer contributions to the National Benefit Fund, the surplus notwithstanding.

The precise value of last year’s Medicaid rate increase has been difficult to determine.

A draft analysis of the impact, prepared by the Cuomo administration shortly before announcing the increase, shows 1199-affiliated hospitals receiving 61 percent of the net benefit, or $590 million over three years, even though they account for about half of hospital admissions statewide.