Following through on Speaker Silver’s promise earlier this month, the Assembly is reportedly about to introduce a bill raising the minimum wage from $7.25 to $8.50 an hour, with automatic increases thereafter in line with the cost of living.  As we’ve noted here before, this is a swell way to reduce job opportunities for low-skilled, entry-level workers — and it’s not a very effective way of helping the working poor, either.

As Rus Sykes pointed out here recently, New York’s exceptionally (and appropriately) generous Earned Income Tax Credit (EITC) already delivers over $1 billion in wage subsidies to ensure that no one really has to support a family on $15,000 a year.  Unfortunately, the EITC and other social program supports for the working poor went unmentioned in today’s New York Times story on the Assembly bill.

Together these refundable credits provide $4.5 billion annually ($3.5 billion federal and $966 million state) in wage supplements to low and modest working families — money that is  re-spent in the NYS economy, Rus points out.  As the chart below demonstrates, the EITC already effectively raises the minimum wage from $7.25 hour to $10.44 hour without driving up the cost of labor, and killing jobs. Unlike a minimum wage increase which increases wages and the cost of labor across the board, the EITC targets maximum benefits to families earning approximately between $10,000 and $20,000 annually. 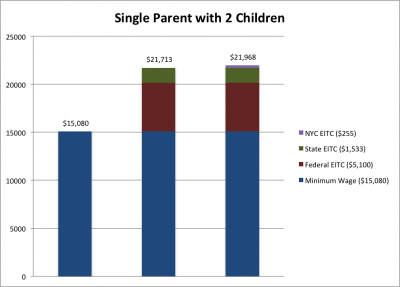