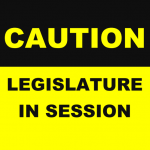 On the whole, New Yorkers can breathe a sigh of relief if the state Senate’s gridlock forces an early end to the 2018 regular session of the Legislature.

Otherwise, the next two weeks will still leave plenty of time for lawmakers to get up to no good. While there’s little chance of agreement on high-profile items like congestion pricing or marijuana legalization, and zero hope for the progressive pipe dream of single-payer health care, lawmakers in both parties have an agenda crammed with lower-profile measures that could do plenty of damage to taxpayers and economic competitiveness.

Lawmakers have often marked the last day of session by passing a “big ugly,” a lengthy, multi-part bill that covers numerous otherwise unrelated issues. And they’ll have no shortage of bad ideas to pick from.

Legislation (S2975/A5498) sponsored by Sen. Terrence Murphy (R-Westchester County) and Asm. Harry Bronson (D-Monroe County) would expand the definition of “public work” to make contractors on private projects that get subsidies or other public assistance pay prevailing wage. That, in turn, would give union contractors a leg-up in bidding on these jobs.

The bill is a major priority for the building trade unions, which are desperate to infuse additional cash into their underfunded pension plans, “most of which are grappling with long-term funding shortfalls exacerbated by aging demographic profiles,” McMahon and Gardner write.

Albany has come close in recent years to enacting a multi-billion dollar unfunded mandate on local governments by locking in the other post-employment benefits (OPEB) they must provide.

Bills such as S8220/A5455 by Sen. Andrew Lanza (R-Staten Island) and Asm. David Weprin (D-Queens) would block employers from “diminishing” benefits, meaning taxpayers would have to absorb 100 percent of future cost increases. As E.J. McMahon explained another time the bill came close to passing:

Public-sector unions representing non-school employees have been seeking the same sort of “protection” for years, but earlier versions of the Lanza bill were vetoed by Govs. George Pataki, Eliot Spitzer and Paterson.

Lawmakers have falsely said it won’t add to taxpayers costs because it “merely requires the State to continue the level of benefits which it is now providing,” as the Lanza-Weprin bill memo asserts.

New York’s property tax cap has been wildly effective, saving New Yorkers billions of dollars on school taxes alone since its enactment in 2011 at Gov. Cuomo’s urging. These savings could end, however, if lawmakers get their way and weaken it—as more than 70 proposed bills would.

Lawmakers, acting at the urging of the state teachers union, have proposed legislation that weakens or even eliminates the cap on school taxes by letting voters override the cap without a supermajority, or by decoupling the cap from inflation.

It’s unlikely Cuomo would sign a bill gutting his signature policy achievement, but many other proposals would drill holes in the cap and let taxes rise faster by exempting specific categories of school district spending from the formula. Some exemptions cover politically fashionable topics, such as “safety and security” at schools.

These exemptions are Trojan horses for people who generally want higher school spending. Exemptions wouldn’t just exclude the growth of costs in a particular category: they would instantly hike the cap by the entire amount being spent this year plus whatever else the district wants to add. If legislators were to create an exemption for “school security,” districts would get a windfall beyond the added security costs, and they would be free to use that extra money on unrelated purposes—such as pay hikes for teachers.

The proposed benefit boost for uniformed court officers (A9910/S7704) has a low price tag, including a one-time cost of $1.12 million plus only $363,000 a year. But it represents, by far, the most expensive precedent on the list because—if passed and signed—it would represent the first step down the slippery slope of “tier equity”—the union-favored euphemism for rolling back the tier 5 and Tier 6 reforms. Gov. Andrew Cuomo has vetoed it four times since 2014, yet that won’t stop the Legislature from passing it again. Unions are willing to take their shot at getting the governor to change his mind in an election year.

At the very least, the possible floor vote on this bill will show who’s actually serious about controlling pension costs. Unfortunately, in the past, the answer has boiled down to practically nobody. When the bill last passed, the only “no” votes were Sen. Betty Little (R-Warren County), Asm. Michael Fitzpatrick (R-Suffolk County), Asm. Christopher Friend (R-Chemung County), Asm. Andrew Goodell (R-Chautauqua County) and Asm. Carrie Woerner (D-Saratoga County).

With New York giving out $445 million a year to the film and TV industry, others want in on the racket. Sen. Martin Golden (R-Brooklyn) and Asm. Joe Lentol (D-Brooklyn) are pushing a bill (S3159/A2670) to give $100 million in similar refundable tax credits to video game developers and music producers.

substitute the name of another industry of your choice wherever “music” or “gaming” is mentioned, and you could make the same case for a giveaway to almost any business.

The cost of health care in New York is inflated in no small part because of the state Legislature’s tradition of forcing health insurance providers to pay for services and procedures—even when they go against medical guidance. Bill Hammond has been monitoring the 120 bills that would push health insurance costs up further by expanding what policies must cover.

State lawmakers could also set arbitrary minimum nurse-to-patient ratios in hospitals. The “safe staffing” bill (S3330/A1532) is a bid by public- and private-sector nurses unions to amp up dues collections. The bill sponsors, Sen. Kemp Hannon (R-Nassau County) and Asm. Aileen Gunther (D-Sullivan County), haven’t calculated the impact on the state budget—let alone the health care sector at large. But that didn’t stop the state Assembly from passing it in 2016, and the bill now has 37 sponsors in the Senate.

Their bills (S8152/A10370, S8683/A10371, and S8270/A10736) take different approaches to the same goal: negating state Court of Appeals decisions and stripping local elected officials of their ability to administer discipline within their police departments. Instead, discipline would have to be collectively bargained, likely landing decisions in the hands of arbitrators instead of the people’s elected representatives. As E.J. McMahon wrote in 2014 when Gov. Cuomo vetoed a similar measure:

It’s not just that resisting the union’s push is consistent with democratic accountability. Preserving this fundamental managerial prerogative for the police commissioner is in the best interest of the police department.

Taxpayers got at least a momentary reprieve last week when the deadlocked state Senate went two days without taking up any bills. For all the bellyaching about Albany dysfunction, taxpayers are too often on the losing end when things actually get done.