New York’s cities, already the most fiscally stressed class of local governments in the state, will be hit especially hard by the next wave of pension contribution increases announced yesterday by the state comptroller. That’s because city payrolls tend to be dominated by police and firefighters, for whom the tax-funded employer contribution will rise by 4.2 percent of salaries. The pension contribution increase for other employees will be 2.6 percent of salaries.

Pension contributions are calculated as a percentage of covered payroll and billed once a year by the comptroller on behalf of the pension fund. The rates announced yesterday by the comptroller are payable in February 2013 but will be accrued by most municipalities in their fiscal 2012 budgets.

The increase — latest in a series — reflects the pension fund’s continuing efforts to dig itself out of a hole caused by the sharp drop in its asset values during the financial crisis and bear market of 2007-09. Although the fund’s asset values rose 14.6 percent in the year ended March 31, it remains far below its target level, and its equity investments have actually lost money during the first five months of fiscal 2011-12. The entire syndrome is explained in greater detail the Empire Center’s report, “New York’s Exploding Pension Costs.” 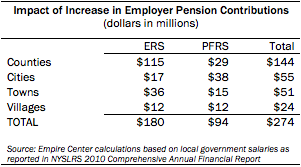 Based on 2010 payrolls, the statewide cost to taxpayers of the pension contribution increases will come to at least $274 million, as shown at right. It’s important to note that this is what will be billed but not necessarily paid next year. Under a 2010 law, the state and its local governments can artificially cap their annual pension contribution increase at a single percentage point, “amortizing” the rest of each year’s excess over a 10-year period, repayable with interest to the pension fund. Few localities have joined the state in opting for this stretch-out so far.

Then there’s the question of how the pension increase will interact with the state’s newly enacted local property tax cap, from which a portion of rising pension costs are excluded. Specifically, in addition to the statutory 2 percent limit, the tax cap law allows  “a tax levy necessary for expenditures for the coming year for local government employer contributions to the New York state and local employees’ retirement system caused by growth in the system average actuarial contribution rate minus two percentage points.”  So, for those 2013 pension contributions, the exclusion works out to 0.6 percent of the ERS payroll and 2.2 percent of the PFRS payroll.

The extent to which the pension exclusion raises the tax cap will vary by locality, depending on the makeup of the workforce, and the relative size of the base tax levy compared to the payroll.  In localities where the property tax represents only one piece of overall revenues — for example, cities that also derive revenue from local sales taxes, parking meters, fines and fees — the added “cap room” due to the pension increase will be larger, because the payroll will be larger relative to the tax levy.

Take, for example, the city of Albany. According to its 2011 budget, the city’s tax levy this year is about $54 million.  City employee salaries come to about $74 million, and the departmental breakdown of personal service costs suggests this consists of $46 million in PFRS member salaries and $28 million in ERS member salaries. Thus, the Albany tax cap exclusion can be calculated as follows:

Based on these figures, the city of Albany’s adjusted property tax cap would appear to be 4.2 percent, plus “physical or quantity change” in the tax base; i.e., the value of any new taxable construction since last year’s assessment rolls were closed. By contrast, in a town with no police force that relies primarily on its property tax for revenues, the impact is likely to be much smaller, typically raising the cap by a percentage point or less.

As argued repeatedly in this space, the optimal property tax cap in New York would not include any loopholes. However, the partial allowance in the enacted cap, included at the insistence of Assembly Democrats, made for a tolerable compromise. Here’s one reason why: pension costs over the past two years have been rising at exceptionally fast rates to make up for exceptionally large market losses by the pension fund in 2007-09.  However, even assuming the pension fund realizes sub-par returns for years to come, which is entirely possible, pension contributions will not continue increasing by more than two percentage points a year indefinitely.  Rather, they will level off at intolerably high levels (a different problem).

Will Albany bust the cap?