The national economy just missed a big milestone in May, when total private employment finally would have surpassed the February 2020 pre-pandemic level.

Would have, that is—if not for New York.

Total private employment in the Empire State as of May was still 399,200 jobs below the February 2020 mark, according to the latest state and federal estimates.  During the same period, the combined total for all other states (plus D.C.) was 165,000 jobs above the February 2020 total.** At this rate, the 50-state total appears likely to finally move above the pre-pandemic level this month, while New York’s private job base currently is growing at a rate that won’t achieve a full jobs recovery for another year, in June 2023.

As shown below, in May the U.S. as a whole was within 0.2 percentage points of its returning to the February 2020 pre-pandemic private employment level. New York remained much further behind.

As of May, total private employment in New York State remained 4.5 percent below the February 2020 total. Only Hawaii (-9.8 percent), Alaska (-5.6 percent), Vermont (-4.9 percent) and North Dakota (-4.8 percent) were further behind the recovery pace, as shown below.

Seventeen states had moved back above their pre-pandemic levels, led by Utah (up 6.7 percent) and Idaho (6.2 percent).  Another 10 states were within one percentage point of ther February 2020 employment levels.

Among the largest states, New York’s recovery continued to trail far behind pandemic rebound trends in Texas (+3.7 percent) and Florida(+3.2 percent), which imposed fewer and looser restrictions at the pandemic’s peak. Even California, which imposed pandemic restrictions as severe as New York’s, has come closer to full recovery (just 0.6 percent below the pre-pandemic peak as of May).

On a non-seasonally adjusted basis, the pace of New York’s private-sector employment recovery has picked up the past year— including a net jobs increase of 5.8 percent in May, compared to a national gain of 5 percent. But as shown in the following chart excerpted from the state Labor Department’s monthly jobs report, New York City’s year-over-year 8.4 percent gain accounted for the bulk of the statewide growth. With the exception of Buffalo-Niagara Falls, every other metro area of the state trailed far behind the U.S. growth rate. 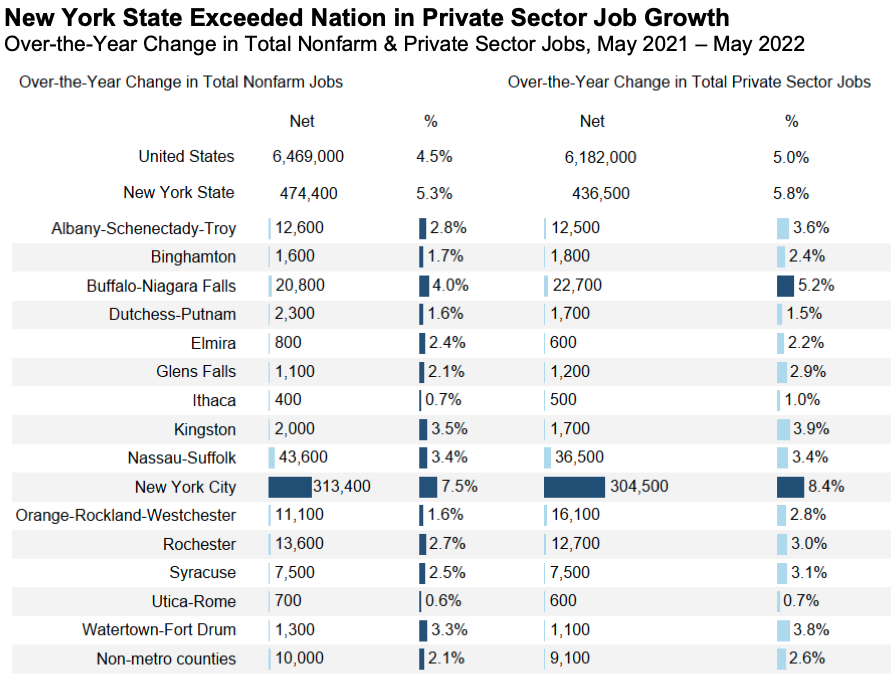 New York’s unemployment rate was 4.4 percent, compared to a nationwide unemployment rate of 3.6 percent.  Both rates are down sharply from pandemic spikes of 16.5 percent in New York and 14.7 percent nationwide. The labor force (people available and looking for work) has grown on both the state and national level, but New York’s labor force participation rate run in May was estimate at 59.8 percent, while the national rate was 62.3 percent. Both rates were below February 2020 levels, but New York is slightly behind the national recovery in this category as well.

Another key measure of economic growth at the state level is personal income, as updated quarterly by the federal Commerce Department’s Bureau of Economic Analysis (BEA).  According to the latest BEA estimates, personal income in New York State rose 4.6 percent on an annual basis in the first quarter of this year, compared to the fourth quarter of 2021.  That was slightly below the national rate of 4.8 percent, ranking 30 out of 50 states—but as shown below, it also a slower growth rate than estimated for any neighboring state except New Jersey. 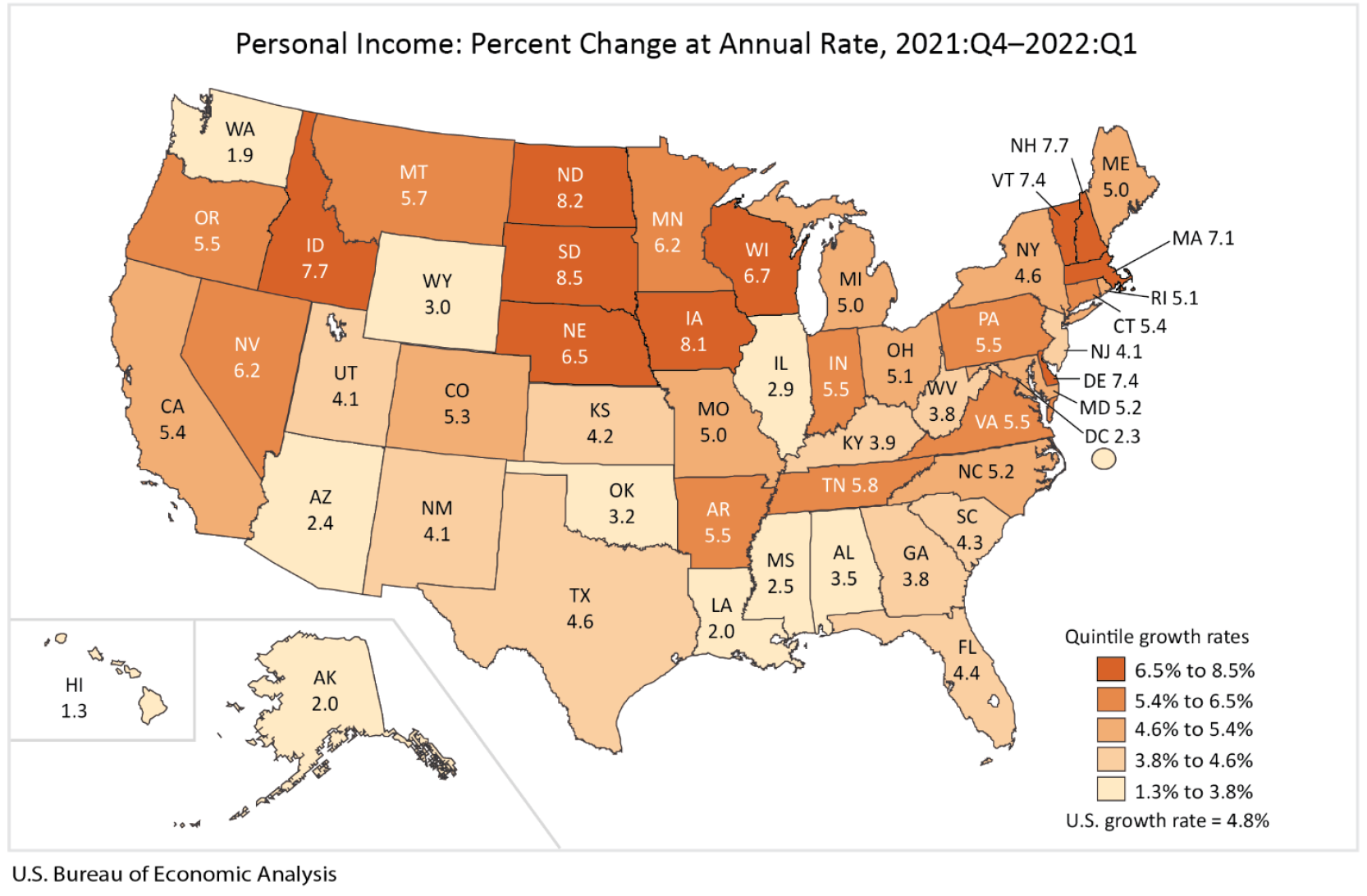 ** The basis for the figure used in the this paragraph near the top of this post is the BLS estimate of May private-sector national employment, seasonally adjusted, minus the same month’s estimate of seasonally adjusted private employment in New York. The national total differs very slightly from the sum of employment estimates for the 50 states, D.C., and territories; based on a sum of those totals, the 49-state-plus D.C. employment estimate exceeds the pre-pandemic level by 197,000 jobs.

Paterson may be too optimistic on the economy

Too big to fail, and swallowing New York