As reviewed here yesterday, 224,468 more residents moved out of New York than moved in from other states between 2010 and 2012, by far the nation’s largest net domestic migration loss during the period.  At the same time, New York State gained 209,917 foreign immigrants, nearly 90 percent of whom settled in New York City, Long Island or the lower Hudson Valley.

Four upstate counties — Tompkins, Jefferson, Onondaga and Albany — cracked the statewide top 10 list for largest net foreign immigrant intake as a rate of 2010 population.  Tompkins has no large metropolitan areas but is home to Cornell, which draws foreign students and faculty, while Jefferson County is home to Ft. Drum, whose military base residents technically are counted as foreign immigrants when return from overseas duty. The presence of large college campuses may explain some the relatively large immigration numbers for Onondaga and Albany counties, respectively, although refugee resettlement efforts by local charities in those counties probably also play a role. (People moving here from Puerto Rico also are counted as foreign immigrants.)

Here’s a county-by-county breakdown of net foreign immigration for each New York county during the latest two-year period. 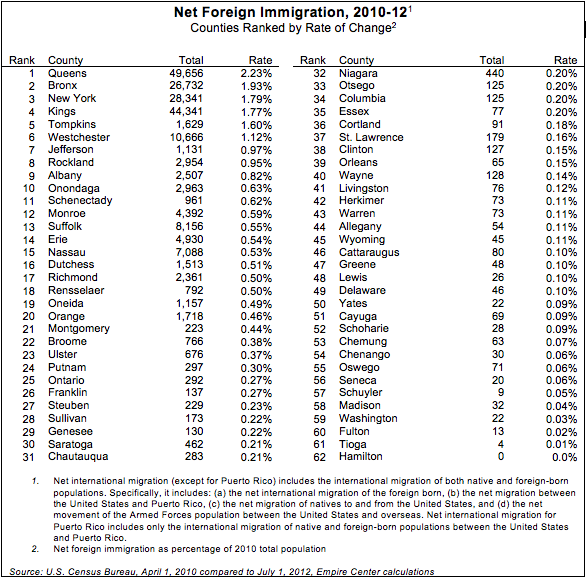