Nursing home staffing levels remained an unreliable indicator of Covid-19 risk for residents through the second year of the pandemic, an updated analysis shows.

The analysis compared the death rates in New York nursing homes through March 2022, as a percent of pre-pandemic occupancy, based on the homes’ federal star ratings for staffing as of January 2021.

As seen in the chart below, there was no evident correlation between the two metrics: Facilities with the lowest rating of one star have collectively lost the smallest share of their pre-pandemic occupancy, while three-star facilities have seen a higher death rate than two-, four- or five-star facilities. 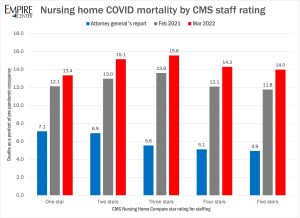 The lack of a pattern is consistent with what the Empire Center found in March 2021, shortly after it obtained complete data on nursing home fatalities through a Freedom of Information lawsuit against the Cuomo administration.

The results raise questions about the efficacy of a new state law imposing minimum staffing requirements on nursing homes. While increased staffing could be expected to improve care in some ways, it does not appear to have been associated with better outcomes with respect to the pandemic.

These findings contradict findings in a January 2021 report from the office of Attorney General Leticia James. Based on the data made available by the Health Department at the time – which omitted several thousand residents who had died after transfers to hospitals – the attorney general’s analysis found a strong correlation between low staffing ratings and high mortality rates.

When the Empire Center replicated the analysis using more complete data, however, the correlation disappeared.

Based on its findings, the attorney general’s report endorsed the enactment of minimum staffing ratios for nursing homes, which the Legislature voted to do in May of last year. That law belatedly went into effect last week, after the expiration of an emergency order by Governor Hochul, which had suspended enforcement based on a shortage of health-care workers across the state.

Nursing homes are warning that it will remain difficult for them to comply.

Another regulatory push in Albany has focused on for-profit nursing homes, which represent two-thirds of facilities in New York. A law enacted last year caps their profit margins at 5 percent, and a bill passed by the Assembly on Tuesday would bar for-profit owners from opening new homes or expanding existing ones.

The Empire Center’s updated analysis finds that death rates were generally higher in for-profit nursing homes, but not in the downstate region where the pandemic was most severe.

However, in the downstate region – consisting of New York City, its northern suburbs and Long Island – the highest death rate occurred in not-for-profit homes, at 16.5 percent, compared to 15.3 percent in for-profit homes and 14.6 percent in government-owned facilities.