But in fact, under a 2010 law championed by the comptroller himself, the State of New York is not paying its pension bills on time.

As detailed in the table on page 23 of this report, the state deferred $249 million of last year’s $1.6 billion pension contribution and $635 million of this year’s $2.1 billion contribution. The Division of the Budget (DOB) expects to defer another $4.4 billion over the next six years. Throughout this period, annual pension contribution increases over one percentage point will be stretched out in the form of a 10-year notes payable to the pension fund — which will book them among its fixed-rate assets.

This is borrowing by another name, although DOB’s preferred euphemism for the practice is “pension amortization.” Or, as former Lt. Gov. Richard Ravitch once pointed out: “Call it what you will; it’s taking money from future budgets to help solve this year’s budget.”

As noted in this informative December 2010 report by the state Senate Committee Select Committee on Budget and Tax Reform, New York has repeatedly resorted to pension amortization in the past.  In other words, we’re not only failing to pay our bills now — we also have failed to do it before, although we have indulged in this practice less often than some other states.

The report sums up the pension amortization arguments, pro and con, as follows:

By stabilizing annual employer contributions, amortization gives a modicum of predictability to participating employers, forestalling the need for undesirable tax increases or painful service reductions. At the same time however, amortization prolongs the period over which employer contributions will increase, and the additional cost being shouldered due to interest costs can in all likelihood exacerbate the very fiscal straits that led to amortization in the first place. (emphasis added)

As for that 14.6 percent state pension fund asset growth last year: it was nearly double the target return rate, which is sure to fuel union arguments that there’s no problem with the public pension system that a bull market couldn’t fix. Because, as we all know, raging bull markets are the normal order of things, right?

The real story: the pension fund’s actuarial accounting method assumes a return of 7.5 percent a year, down from 8 percent before 2010.   On an annual basis, even after two consecutive years of double-digit returns, the compound value of returns since 2004 remains well below the fully funded level, as illustrated in the chart below. 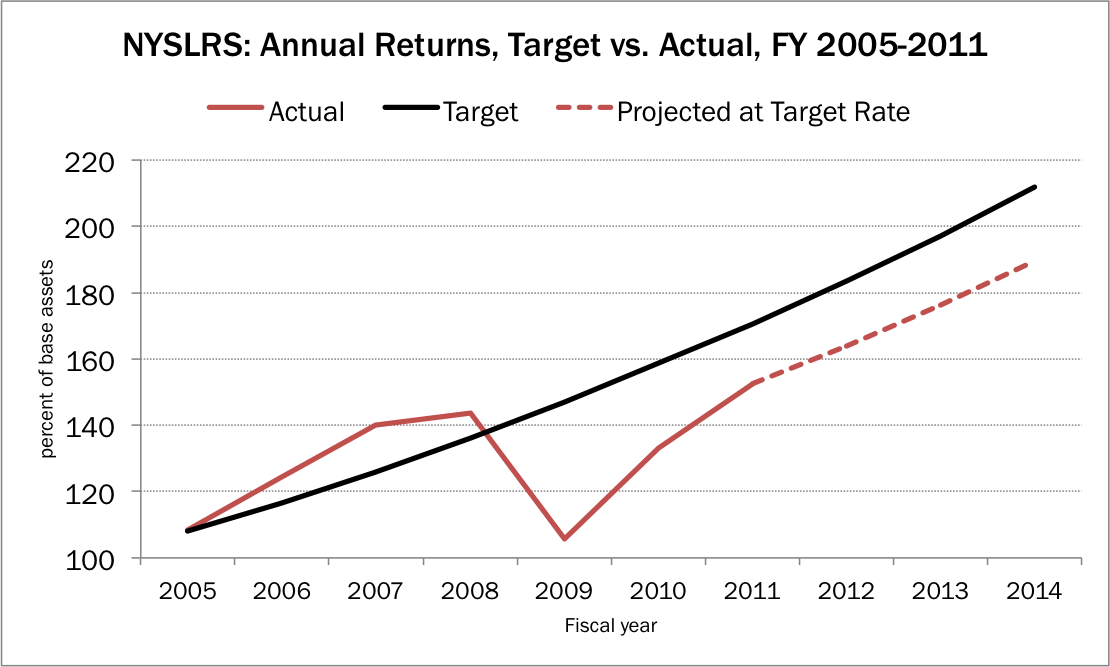 The actual numbers are calculated in a more complicated fashion, using a five-year “smoothing” technique to iron out some of the volatility in market returns.  On this basis, the 14.6 percent return makes little difference to the retirement system’s funded status in the short term.

For example, in calculations for our December 2010 “Pension Bomb” report, my Manhattan Institute colleague Josh Barro projected that the New York State Employee Retirement System (ERS) would be 91 percent funded (on an “actuarial” basis) assuming it hit the 7.5 percent return target for 2011.  The higher-than-expected 14.6 percent return has elevated that funding ratio all the way to … 92 percent. Result: pension bills for taxpayers will keep rising for the next several years, at a minimum.

As it happens, the state pension system realized an identical 14.6 percent return in 2006.  Over the next two years, returns came to 12.6 percent and 2.6 percent — followed in 2009 by a massive loss of nearly 25 percent.

Could that happen again?   The answer is anybody’s guess.  Meanwhile, since the state and local pension fund’s new fiscal year began on April 1, the S&P 500 has dropped by one percent.