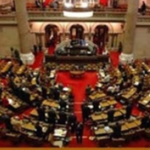 The closing days and hours of New York State’s 2019 legislative session were easily among the most economically consequential in Albany’s recent history—but not, on balance, in a positive sense.

In the week before adjourning, the Senate and Assembly passed (by overwhelming margins) two major pieces of legislation likely to stifle economic growth and job creation in New York for many years to come. As previously analyzed here, they are:

Both bills were hailed as major achievements by Governor Andrew Cuomo, who signed the rent-control bill immediately.

The Legislature also passed a slew of narrower measures that will add to the already high costs and complications of living, working and doing business in the Empire State. These included a bill that would let striking union members collect unemployment insurance benefits a week after the start of a walkout—effectively subsidizing union strike funds with higher employer UI premiums.

Also approved, as described below, were a series of bills adding to the state’s already long list of health insurance coverage mandates, which add to high premiums for all fully insured health plans in New York.

To top it all off, the governor and Legislature agreed to borrow and spend another $1.2 billion on capital projects, including (yet) another $385 million for their favorite capital pork barrel slush fund.

To the extent the end of the legislative session produced any positive news for the state’s economic outlook, it was in the form of bad bills that didn’t quite make it across the legislative finish line.

But one expansion of the union pay mandate was approved—in a highly unusual form—as part of the climate legislation.

Earlier versions of the Climate Leadership and Community Protection Act included provisions referring specifically to Labor Law Section 220 and also requiring labor peace agreements and other union concessions on projects required by the law. But those passages were deleted from the final version, replaced by a single sentence (line 50, page 18):

“This act shall be subject to current prevailing wage law.”

“This act,” after all, refers to 21 pages of bill copy aimed at bringing about a whopping 84 percent reduction in greenhouse gas emissions by 2050, requiring a wholesale shift to renewable sources such as wind turbines and solar panels, not to mention an all-electric vehicle fleet, with many details to be addressed in a “scoping plan” produced by a 22-member “Climate Action Council” in 2022.

And all of that will be “subject to current prevailing wage law”?

State lawmakers vote almost every year to impose new coverage mandates on health insurance plans sold in New York State. Bill Hammond, Empire Center’s director of health policy, has pointed out that these mandates often go beyond the evidence-based guidelines recommended by major national health organizations. Usually, they drive up costs for New York consumers, who already face the highest average premiums in the lower 48 states. Never are they subjected to serious, impartial analysis of costs and benefits.

Near the end of session, Hammond reports, the Legislature passed no less than a half-dozen such bills, mandating:

Two major health insurance mandates had passed earlier in the session. The FY 2020 budget legislation included a provision requiring large-group insurance plans (defined as 100 or more members) to cover at least three cycles of in-vitro fertilization as well as preservation of eggs or sperm for people at risk of treatment-induced infertility.

And the Comprehensive Contraception Coverage Act (A. 585), which passed on Jan. 22, imposed added requirements on insurers to cover over-the-counter contraceptives; provide a 12 months’ supply of contraceptives per refill; and waive cost-sharing for sterilization procedures.

One of the final bills to be passed before adjournment was a supplemental capital project appropriations bill, which added a net $1.185 billion to the capital appropriations previously approved as part of the FY 2020 state budget. In descending order, the added money consisted of:

All of these authorized expenditures—which will take years to actually unfold—will be paid for with backdoor borrowing, mainly through the all-purpose state credit card formally known as the Dormitory Authority, and also by the Empire State Development Corp.

Messing around with MTA

The session’s final omnibus bill led off with a number of seemingly out-of-the-blue provisions significantly affecting the management and leadership of the MTA, including a change in law that will allow the appointment of Cuomo’s budget director to the MTA board.

“The legislature’s creation of a new MTA position, director of transformation, almost unrecognizably muddles the MTA’s chain of command. This new person will report to the MTA board, not to the MTA chairperson, making him or her far more powerful than, say, the head of the MTA’s subways and buses, someone who should have a big rule in any transformation plan. And with other legislative changes effected in the same bill, the board is even less independent than it was before. The legislature failed to consider a New York City nominee to the board, for example, but approved Cuomo’s state budget director, someone who by definition cannot be independent of the governor. Overall, the legislature has ensured that the MTA’s historic transformation will happen with little oversight this crazy summer.”

The FY 2020 enacted budget basically represented a continuation of Cuomo’s established tax and spending policies, for better (relative spending restraint) and worse (yet another extension of the so-called “millionaire tax”).

Unfortunately, thanks to the measures Cuomo pushed in the rest of the session, in the long run there will be fewer taxpayers to benefit from the cap.