Rising debts and liabilities for pensions and retiree health care could soon translate into higher borrowing costs for at least nine New York local governments, including a half dozen of the largest counties and towns in the state. They’re facing possible bond rating downgrades as part of a nationwide review of local ratings by Moody’s Investors Service.

Moody’s announced yesterday that it was reviewing ratings for a total of 256 bond issuers nationwide based on a new methodology that puts a greater weight on pensions and debt and less on economic factors. The reviews, which could result in either no ratings change or “one or two notch movements” in either direction, will be completed within the next 90 to 180 days, the ratings agency said. Unfunded health insurance promises to retired public employees, estimated to total a quarter-trillion dollars in New York, will also be considered in the pension category when they “appear to be particularly large relative to budget and tax base and management has not demonstrated a willingness to address related costs,” according to the new Moody’s methodology.

Suffolk County, the Empire State’s largest outside New York City, is among the New York localities whose ratings might fall a notch or two when the review is completed, Moody’s indicated.  Other big localities under review and facing possible downgrades include the Long Island towns of Hempstead and Huntington, along with Onondaga, Orange and Saratoga counties.  All except Onondaga County already had been assigned “negative” ratings outlooks by Moody’s before the review was announced yesterday. Suffolk’s bond rating was already A2, not particularly high for a large and relatively affluent county.  A further downgrade of a notch or two would bring that county closer to Moody’s lowest investment grade band, Baa.

On the other hand, 21 relatively low-rated New York localities under review by Moody’s are listed in the “possible upgrades” category. The largest is the city of Yonkers (see list at bottom of this post).

The increase in the weight attached to debt and pensions recognizes the potential for large pension liabilities to constrict a local government’s financial flexibility, says Moody’s. Because pension liabilities and debt each represent enforceable claims on the resources of local governments, Moody’s has weighted the debt portion of its currentmethodology more heavily to capture the combined financial impact of both debt and pensions.

The reduction in weight attached to economic factors acknowledges that some local governments are either unwilling or unable to convert the  strength of their local economies into revenues, says Moody’s. Tax caps,  anti-tax sentiment, the natural lag between economic activity and its  conversion into government revenues, often place obstacles between  municipal governments and the income generated by their local economies,  as do a variety of other factors.

The table below shows all New York localities under review; the “NOO” notation in the second column means there was no ratings outlook before the review. 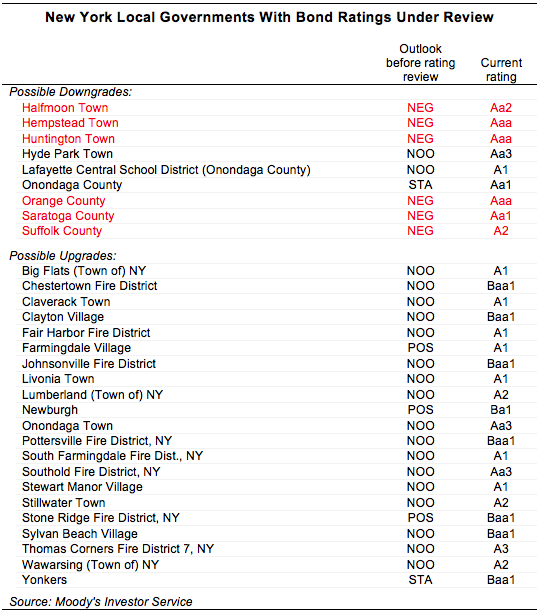