The New York State and Local Retirement System (NYSLRS) closed its most recent fiscal year with a return of just 5.96 percent — well below the 7.5 percent target rate used to discount its long-term liabilities.

Seeking to accentuate the positive, a press release from Comptroller Thomas DiNapoli (”DiNapoli: State Pension Fund Posts Strong Gain”) points out that the fund’s total asset value of $150 billion as of March 31 was the “highest since the global economic meltdown in state fiscal year 2008-2009.”

But here’s another way to look at it: the fund is still $6.3 billion below its level at the end of fiscal 2006-07, a period in which benefit payouts have risen nearly $3 billion.  The below-target return for 2012 alone represents a shortfall of about $2.2 billion — i.e., the fund’s asset values would total $152.5 billion if it had earned 7.5 percent, and would still be about $4 billion below the fiscal 2007 level.

For purposes of setting employer contribution rates, the state pension fund normally “smooths” asset values into a rolling five-year average, to iron out some of the volatility in financial markets.  Since abruptly “re-starting” its asset base calculation to take advantage of a strong market recovery in 2004, NYSLRS’ average annual rate of return has been 6.2 percent. The chart below shows the trend in NYSLRS asset values, indexed to 100, using NYSLRS return assumptions compared to actual returns in the past eight years. 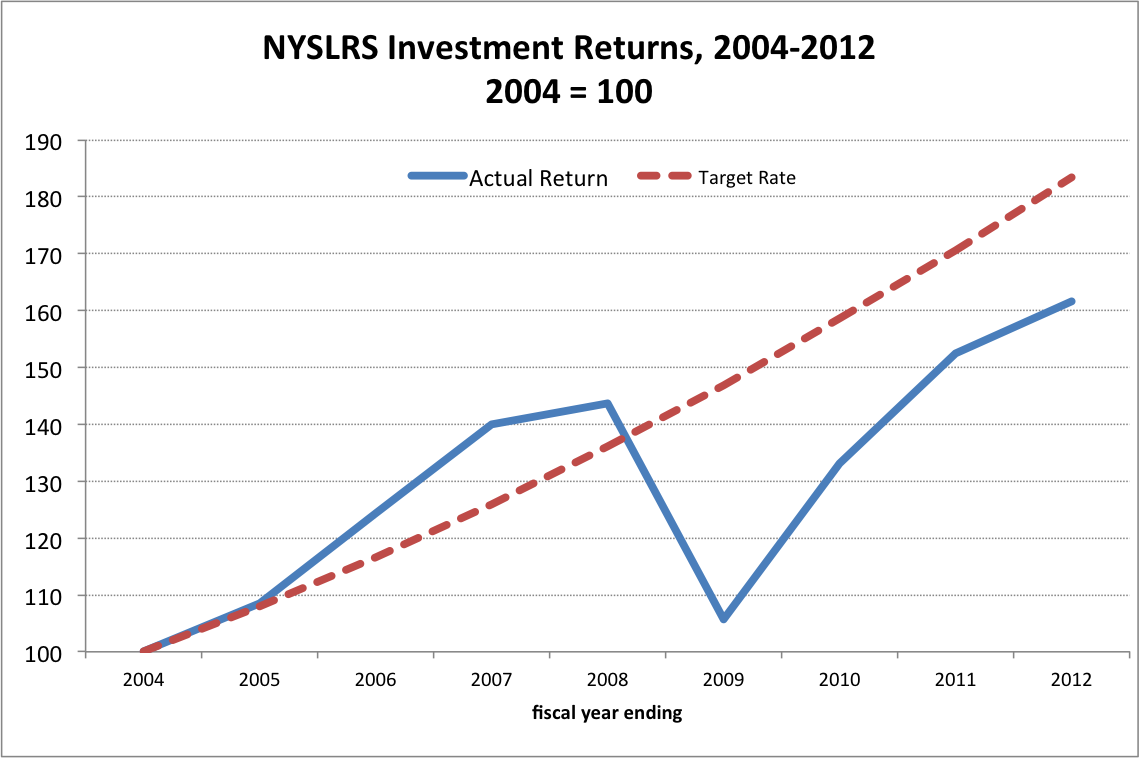 If actual returns had met the target throughout that period, the fund’s asset values should be about 13 percent higher, which would equate to a total of $170 billion.  Contributions to the fund will remain well above projected “normal” levels until this gap is closed.

By the way, NYSLRS’ domestic equity portfolio is its largest category of holdings.  Last year, it earned 6.9 percent, closely tracking the S&P 500. But since the state fiscal year ended, the S&P 500 has lost about 6.5 percent.