A recent front-page story in The New York Times at least briefly pierced the fog of complacency that seems to have once again surrounded the issue of public pensions in New York.

Despite a huge increase in pension outlays since 2000, the hole in New York City’s pension funds “just keeps getting bigger, forcing progressively more significant cutbacks in municipal programs and services every year,” the Times reported.  The story focused on the “glaring issue” of the pension system’s high investment fees and its “antiquated and inefficient governing structure.”

However, while the pension system sorely needs a better investment strategy and more streamlined and accountable governance, these fixes will do very little to make up an unfunded liability that, according to the latest city budget analysis by state Financial Control Board, has reached at least $72 billion.

The main problem: massive funding shortfalls are a feature, not a bug, of a system expressly designed to hide the true costs and risks associated with unsustainable pension promises.

Public pension systems like New York’s are subject to what a Rockefeller Institute study described as “bad incentives and inadequate rules,” which have caused pension administrators and government funders to embrace “potentially destructive myths and misunderstanding.” Unfortunately, despite the Times’ consistently strong reporting on the issue, the myths and misunderstanding persist among New York officials.

As shown in the chart below, New York City’s tax-funded pension contribution is budgeted at nearly $8.5 billion this year, 17 percent of city tax revenues, after averaging $1.5 billion throughout the second half of the 1990s and dipping as low as $700 million in 2000.  Even after adjusting for the impact of recent strong investment gains, offset by higher costs attributable to salary increases under new labor contracts, pension contributions are projected to exceed $8.7 billion by 2018. 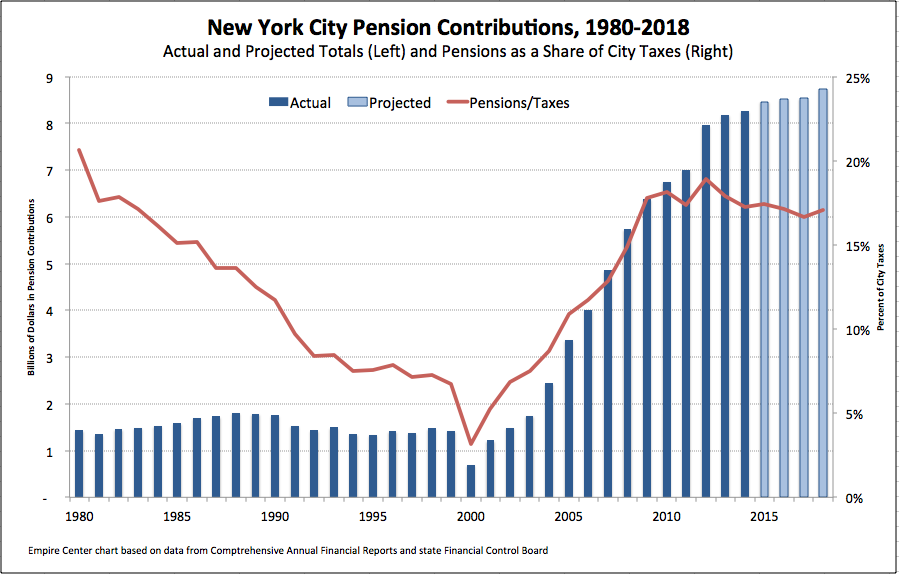 Unlike their counterparts in the private sector and in other countries, America’s state and local public pension funds are allowed to assume they will hit ambitious investment return targets based on risky investment strategies, discounting their liabilities accordingly.

New York City’s target rate of return was 8 percent for many years until it was reduced in 2012 to 7 percent – a level that Mayor Michael Bloomberg said was still “indefensible,” comparing it to the returns promised by Bernie Madoff. But as the Times story noted, an immediate switch to the 7 percent assumption also would have required an immediate $2.8 billion boost in the pension contribution. To lessen the impact on current budgets, the city pension actuary allowed the transition to be amortized over 22-year period, effectively pushing more costs into the future.  (The New York State and Local Retirement System, covering government employees outside New York City, still assumes a 7.5 percent return, while the state pension system for teachers outside the city still assumes 8 percent.)

Since public pensions are offered as a risk-free proposition to their beneficiaries, most private-sector and academic economists, financial analysts and actuaries agree that public pension fund liabilities should be discounted on the basis of something approximating a risk-free or low-risk market rate, such as the yield on AAA rated corporate bonds or long-term U.S. Treasury securities.

Using the “market value” approach to compare liabilities and assets, the funded levels of New York City’s pension funds as of 2012 were anemic, as shown in the table below. 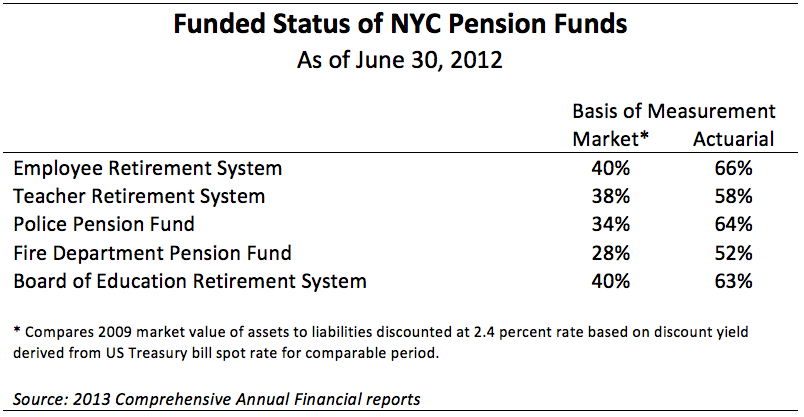 Even using the pension funds’ own preferred approach, comparing an “actuarial” measure of assets to liabilities, their funded ratios ranged from just 52 percent for the Fire Department fund to 66 percent for the New York City Employees’ Retirement System, the largest of the funds. That’s why New York City ranks poorly in several assessments of large city pension funds, including a Morningstar investment research report cited by the Times.

The fuse on New York City’s exploding pension costs was lit by the market downturn of 2000-02, from which the funds have never fully recovered. Investment losses were barely half the cause of the problem, as a subsequent report by the city comptroller’s office showed. The rest was self-inflicted by bad policy choices, invariably egged on by public employee unions. As I pointed out in a 2011 New York Post op-ed:

Making matters worse, then-Mayor Rudolph Giuliani and the city’s labor unions had agreed in May 2000 to “restart” pension calculations based on peak asset values, departing from a rolling five-year average that included lower values from prior years. That same spring, then-Gov. George Pataki and the state Legislature approved public-pension sweeteners that drove nearly $13 billion in cumulative pension cost increases for the city from 2000 to 2010. These included an automatic cost-of-living boost in pension benefits, enacted over Giuliani’s objections.

Since the fateful re-start took effect, the funds have earned an annual average of 5.5 percent. Result: a huge shortfall. The chart below tells the story. 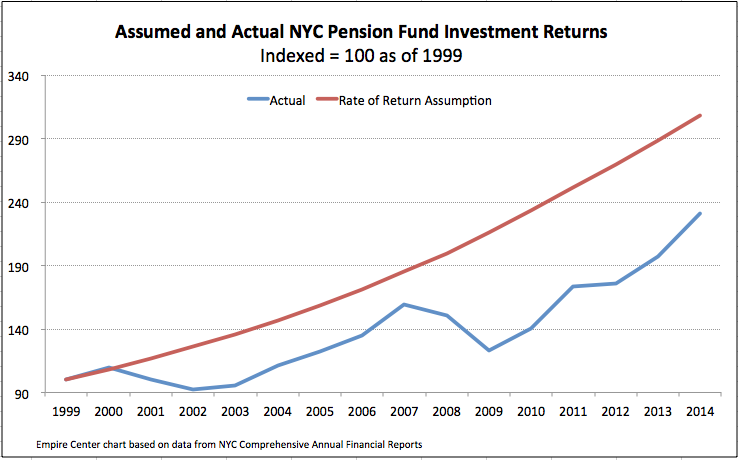 In 2000, the pension fund assumed its investment returns over the next 14 years would be 33 percent larger than the actual result as of 2014–the equivalent of $55 billion on a current asset base of $160 billion. Taxpayers have been forced to make up the difference.

After losing 23 percent in the market downturn of 2007-09, the city’s pension funds have reported double-digit returns in four of the past five years, including 17.4 percent in 2014. City Comptroller Scott Stringer hailed this “good news” and said it would allow the city to “save” nearly $18 billion in contributions over the next 20 years. But there’s a real risk that the funds will earn much less in the future, erasing those putative savings.

Hoping for the best

The city pension system will ultimately recover to fully funded status within the next 10 to 20 years, without putting more pressure on the city budget, only if financial and policy outcomes throughout the period are consistent with this optimistic scenario:

Based on historical experience, this won’t happen.

If pension fund returns are stronger than expected, perennially meeting or even exceeding the 7 percent target in the short term, public employee unions will almost certainly lobby for benefit increases. Indeed, that’s already happening: the state Legislature this year passed a half-dozen pubic pension sweeteners, including a bill that would roll back a key “Tier 6” pension reform for uniformed state court officers. If Governor Cuomo signs the sweetener for court officers, other unions will seek similar treatment. Even if he vetoes such bills, unions will keep pushing their agendas in Albany.

Meanwhile, the city (and state) pension funds will continue to chase higher returns. Before adjourning in June, the state Legislature passed a bill expanding, to 30 percent from 25 percent, the share of public pension fund assets that can be invested in complex, high-risk alternatives such as private equity and hedge funds. Such investments also carry higher fees and are harder to value than the traditional portfolio of stocks, bonds and real estate.

If returns fall short of target, which is at least equally likely, city and state officials will feel pressured to manipulate actuarial assumptions to prevent tax-funded contributions from increasing. Such gimmicks simply push a bigger pile of obligations into the future.

A false spring ahead

Thanks to above-average investment gains in the past two years–based on officially preferred actuarial measures, that is–the city’s pension funds will look healthier when their fiscal 2014 financial statements are released later this year.

Further improvement will be reported in late 2015, based on “lagged” numbers from 2014 that assume the optimistic scenario outlined above. Even then, however, the system will still have unfunded liabilities running into tens of billions of dollars. Annual budget outlays for pension contributions will, at best, stabilize at high levels as the system continues its gradual transition to a funding calculation based on that 7 percent rate of return assumption.

Unfortunately, city officials are likely to seize on short-term improvements in pension funding ratios as evidence that the pension systems no longer pose a threat to the city’s long-term financial stability. It would be far more prudent to assume that the worst is yet to come – and to begin seriously reforming the current system before it’s too late.