Twenty-seven* school districts were seeking to override the state’s property tax cap in yesterday’s school budget votes. Twenty of these districts — or 74 percent — failed to collect the needed 60 percent supermajority to pass, according to news accounts. The closest result was in the Cornwall School District in Orange County, which fell two votes short of an override supermajority.

The table below shows each district along with unofficial vote tallies, based on news reports (NOTE: Niskayuna vote totals corrected from earlier version). 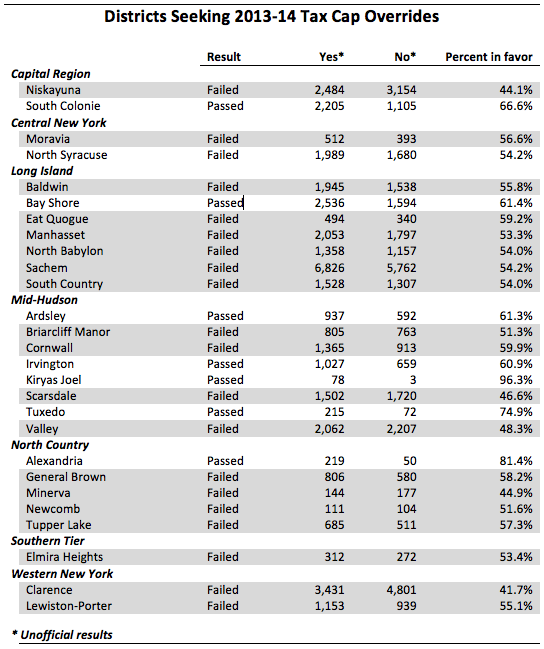 Districts now have the option to resubmit the same budget, or to submit a revised budget, with the next and final round of budget voting scheduled for June 18. If a budget fails to win approval in two votes, the district’s tax levy increased is absolutely capped at zero. (Districts whose budgets failed yesterday also have the option of immediately implementing a contingency budget with no increase–which, it’s safe to say, none will do.)

Last year, the first year the property tax cap was in effect, at least 48 districts sought overrides, with roughly two-thirds succeeding on the first try.  There were fewer override attempts this year because the average cap was much higher to begin with, due to a partial exclusion of rising teacher pension costs.