New York spent 2.6 times the national per-mile average on state highways — but had some of the worst road conditions in the country in the most recent year for which comparable federal data have been analyzed in the Reason Foundation’s 20th Annual Report on the Performance of State Highway Systems. 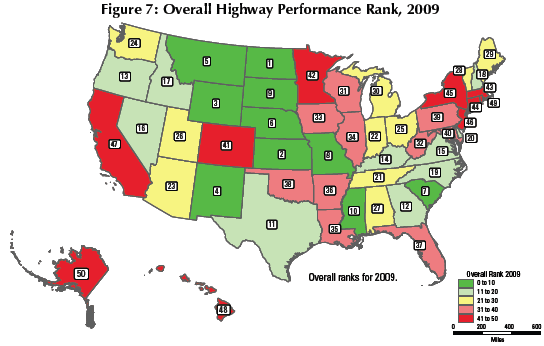 Out of 11 highway and bridge indicators measured by federal data cited in the Reason report, New York beat the U.S. average in only two: fatalities per mile (24 percent better than the national rate) and urban interstate congestion (1 percent better).*

New York’s road conditions are among the very worst in the nation, ranking 46th in its percentage of interstate highways in poor condition and 44th in its percentage of rural arterial highways with lanes narrower than federal standards. Perhaps most alarmingly, 37.03 percent of New York’s bridges were rated “deficient” based on federal inspections, a rate exceeded only by Pennsylvania (37.61 percent), Hawaii (38.05 percent) and Rhode Island (52.85 percent).

It’s not as if we weren’t spending a lot on highway and bridge capital and maintenance: according to the Reason report, the figure in New York as of 2009 was a whopping $374,102 per state-controlled mile, compared to a national average of $144,533 per mile.

This can’t be written off as merely a weather-related phenomenon. Putting aside Hawaii, where everything is expense, comparatively balmy California also has been poorly ranked on the same index for years, while Minnesota is the only other state on the Canadian border to rank in the bottom 10 in the latest report.

So what explains our poor bang-for-the-buck ratio on highways?  New York’s stringent and costly prevailing wage law surely doesn’t help. Nor does the state’s increasing insistence on project-labor agreements favoring unionized firms even when their prices are higher.

* Drivers in the New York City metro area may find that traffic congestion ranking difficult to believe, but the statewide numbers include lightly travelled highways around declining cities in upstate New York.