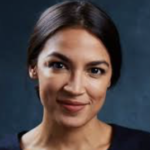 The prospect of a 70 percent top federal income tax rate, as floated by U.S. Rep. Alexandria Ocasio-Cortez in a TV interview, seems to have struck a nerve across the political spectrum. But left or right, Democrat or Republican, politicians in her home state should recognize New York has a lot to lose from dramatically jacked-up federal taxes on higher earners.

Ocasio-Cortez, the just-seated House member from the Bronx, made headlines over the weekend when she acknowledged to Anderson Cooper on “60 Minutes” that higher taxes would be needed to finance a shift to a zero-carbon-emission economy as part of a “Green New Deal” program—whose aspirational goals also include federally funded jobs and income guarantees, plus universal healthcare. Asked for specifics, she replied:

You know, you look at our tax rates back in the sixties, and when you have a progressive tax rate system, your tax rate, you know, let’s say, [on income] from zero to $75,000 may be 10 percent or 15 percent … but once you get to, like, the tippy-tops, on your $10 millionth dollar, sometimes you see tax rates as high as 60 or 70 percent. That doesn’t mean all $10 million are taxed at an extremely high rate, but it means that as you climb up this ladder, you should be contributing more.

The Ocasio-Cortez response on taxes was fuzzy and not well explained—not nearly enough to be described as a formal proposal—but it was sufficient to provoke strong and revealing reactions from journalists, policy analysts and politicians.

Many progressive Democrats—and their favorite economist—seized on her remarks to make it clear they, too, think it’s time to return to 1960s tax levels on the wealthy as a way to redress income inequality and pay for universal healthcare, infrastructure and other priorities. Republicans and conservatives unsurprisingly condemned the idea, predicting based on historical experience that very high income tax rates would reduce work and investment incentives while dramatically increasing tax avoidance.

While Ocasio-Cortez (surprisingly) didn’t mention it, the federal tax rate actually reached as high as 91 percent in the early 1960s. It was reduced to 77 percent in 1964 and to 70 percent starting in 1965, under a tax cut that had first been proposed in 1963 by President John F. Kennedy and subsequently was pushed through Congress by President Lyndon B. Johnson.

When last effective in 1981 (eight years before Ocasio-Cortez was born), the 70 percent marginal rate applied to incomes ranging from $108,300 for single filers to $215,400 for married couples filing jointly—the equivalent, after adjusting for inflation, to $350,000 and nearly $700,000, respectively. Ocasio-Cortez is suggesting a much higher $10 million income threshold for her “60- or 70 percent” top rate. It’s not clear whether she has given any thought to rates on lower rungs of the income ladder—which, to raise any significant amount of revenue for her Green New Deal, would also have to be much, much higher.

In fact, because it was riddled with loopholes and tax shelters, the federal income tax through the mid-1980s was actually less progressive than the current tax code when measured by average income tax burdens on households—despite the much higher marginal rates of the earlier era.

Between 1981 and 2014, when the top rate was lowered from 70 percent to 39.6 percent, the average income tax rate on the highest-earning 1 percent increased slightly, from 21.9 percent (2.7 times the median household’s average rate) to 24 percent of total income (8.7 times the median average), according to the Tax Policy Center. Under the Tax Cuts and Jobs Act (TCJA) enacted last year, the top rate was reduced to 37 percent, but rates in lower income brackets were reduced by larger amounts.

The federal income tax base was significantly expanded by the Tax Reform Act of 1986. In addition to eliminating $60 billion in loopholes, that law shifted $24 billion of individual taxes to corporations, making it possible to cut the top individual rate all the way down from to 28 percent from 50 percent without reducing net revenues from the tax. Roughly speaking, imposing a 70 percent top marginal rate on the current taxable income base would be more comparable to a top tax rate of at least 80 percent or more under the pre-1986 law.

Most significant of all, from a New York perspective, the old federal tax code allowed high earners to offset the steep federal marginal rate with significant itemized deductions of state and local taxes (SALT). These deductions were unlimited until 1991, when the so-called Pease rule imposed an itemized deduction cap at upper-income levels, effectively adding a percentage point to the top rate for high earners in New York and other states with high marginal income tax rates of their own.

When New York’s combined state and city income tax rates last peaked in the mid-1970s, reaching 19.68  percent on a combined basis, full deductibility assured their net cost to affected taxpayers was only 5.9 percent. From 1986 through 2017, as both federal and state-local rates fluctuated, the net effective combined New York State and City top rate fluctuated within a narrower range, from 5.9 to 8.8 percent. But the $10,000 SALT cap effectively has boosted the top rate to its full statutory level of 12.7 percent—easily the highest level ever, as illustrated below in the chart from this April 2018 Empire Center paper on New York’s top-heavy tax base: 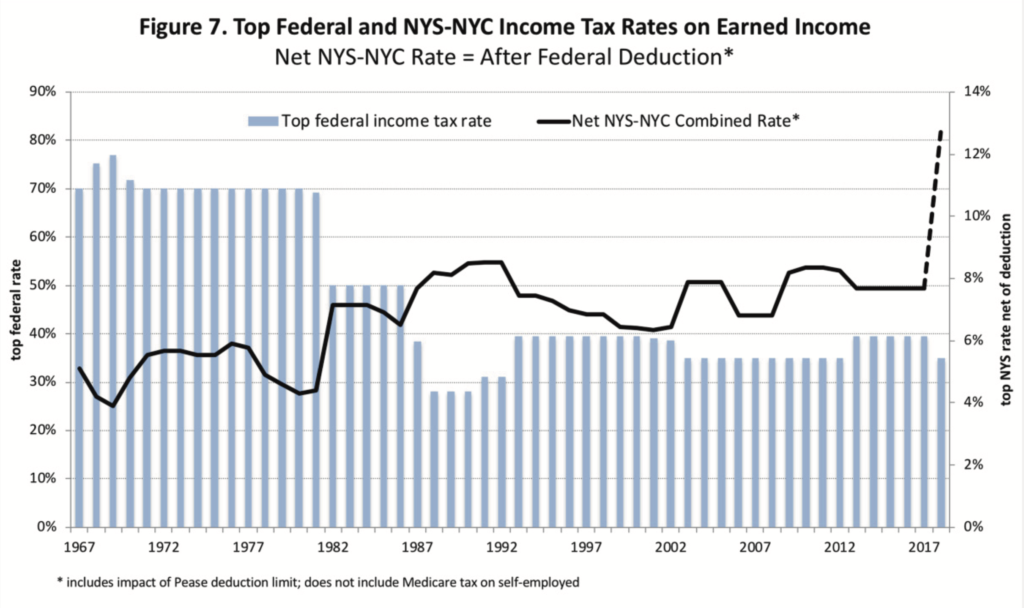 In other words, the last time the top federal rate reached 70 percent, the combined federal-state-local income tax in New York was 75.9 percent. Without SALT deductions, it would be 82.7 percent—assuming the many new Democratic state legislators who share Ocasio-Cortez’s views don’t succeed in pushing the state “millionaire tax” even higher.

Notwithstanding the SALT cap, the new tax law will reduce taxes for the vast majority of New Yorkers, including middle-class families whose state income taxes are also being reduced over the next few years.

However, the SALT cap will result in higher combined federal-state-city income taxes for many households within the highest-earning 1 percent of New Yorkers—especially those living in New York City. The loss of deductions and resulting sharp increase in the net tax price of living and working in New York, compared to low- or no-income tax states, has given affected households a greater incentive to minimize their exposure to New York taxes.

This would be a huge problem for New York, where the top 1 percent (those with incomes approaching $1 million and above) generate 40 percent of the personal income tax, and a higher percentage of the city income tax.

In 2015, there were 2,541 New York resident taxpayers with gross incomes above $10 million, according to state tax data (14 percent of all U.S. households in this bracket). They represented just 0.03 percent all New York resident filers (including low-income filers owing no taxes), but accounted for 16 percent of the state’s total income tax collections that year.  These taxpayers would be certain to take additional steps to absolutely minimize their exposure to income taxes at every level if the top federal rate is ever boosted to 70 percent, or anything close to 70 percent.

So, assume that eventually—perhaps as soon as 2021—both houses of Congress are dominated by large Democratic majorities favoring a return to soak-the-rich federal marginal tax rates of 40 or 50 percent or more, if not the 70 percent cited by Ocasio-Cortez.

Surely this would be accompanied by a restoration of full SALT deductions, right?

After all, a Democratic congressional majority would still be dominated by representatives from (faster-growing) states that have more to lose than to gain from a restoration of the SALT deduction. For that matter, to win election in 2020, a Democratic president also would need to carry states whose residents (and businesses) are about to start pocketing income tax cuts effectively financed in large part by the SALT cap.

Former President Barack Obama repeatedly introduced a tax reform package including a tighter cap on all itemized deductions for taxpayers in the top two brackets. And the 2016 Democratic presidential nominee, Hillary Clinton, made the same proposal.

As the Tax Foundation points out, repealing the SALT cap in isolation would make the federal tax code less progressive—which is the last thing today’s increasingly left-leaning Democrats will want to do.  Once in power, their more likely course of action would be to significantly raise taxes on the wealthiest households with, at most, some partial SALT allowance.

A harbinger of things to come may have been the Senate Democrats’ infrastructure bill, introduced last year. Minority Leader Charles Schumer repeatedly complained about the impact of the new SALT cap on his home state of New York, yet the $1.5 trillion initiative developed under his leadership would be financed largely by rolling back the portions of the TCJA that disproportionately benefit high-earning New Yorkers—without repealing the SALT cap.

There are lots of reasons why a return to a top rate of 70 percent, or anything close to it, would be a terrible idea, economically and fiscally. (For example, here’s a good piece from James Pethokoukis of American Enterprise Institute, explaining why the “return to the good old post-war days” school of taxation is grounded in fallacies.)

This much, at least, should be carefully considered by Democrats in Albany who might be inclined to cheer on their new progressive heroes in Washington: as the late Sen. Daniel P. Moynihan pointed out, New York is always destined to be a loser in Washington’s income redistribution games.

SALT or no SALT, a sharp increase in marginal tax rates on the nation’s wealthiest households can only erode the increasingly wealth-dependent tax base of New York. There is no way around that and no way to avoid its ultimate consequences—even in the Bronx.