At the mid-summer mark, the private sector in upstate New York was still struggling to produce net employment gains, according to the state Labor Department’s latest monthly report.

While the department’s press release once again hailed “a new record high” in statewide employment, the year-to-year trend in much of New York wasn’t exactly impressive.

The net job gain for the rest of the state: practically zilch.

Among upstate’s four largest metro areas, Syracuse (-0.3 percent) and Albany-Schenectady-Troy (-0.5 percent) both lost jobs on a year-to-year basis, according to the preliminary estimates detailed below, while gains were small in Buffalo-Niagara Falls (+0.9 percent) and Rochester (+0.2 percent).  The Southern Tier kept slowly sinking, with both Binghamton and Elmira both registering another month of small private job declines.

The largest percentage increases were in the small volatile metro areas of Ithaca, which is heavily dependent on college and university jobs; Watertown-Ft. Drum, whose economy is dominated by the ripple effects of military postings and spending; and Kingston, where healthcare, banking and tourism are large employers. 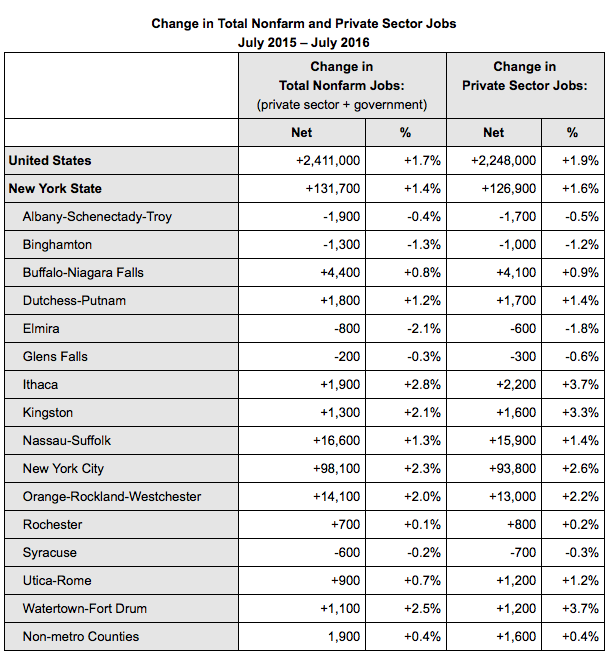 Money graf from the summary in the Fed researchers’ blog:

Within the [NY Fed] region, New York City remains an engine of growth, posting job gains that surpass the national pace. The City’s strong economy has helped boost growth in many surrounding areas, such as northern New Jersey, Long Island, and Fairfield County. Upstate New York has not fared quite as well, though Buffalo has seen some pickup in job growth [over the past several years], and the Capital Region continues to see sturdy job growth coupled with significant gains in manufacturing jobs [also over several years]. That said, not all the news was positive. Much of central New York has seen little growth, with Utica and Binghamton still yet to recover from the Great Recession…

Probing more deeply into the data, the researchers said upstate was still experiencing weak growth in “middle-wage” jobs, reflected by a “limited bounce back in Education and Construction jobs coupled with ongoing declines in Administrative Support and Production jobs.” The two-year trend nationally, and even more so downstate, has included a strong increase in those categories.

Fed President William Dudley touched on upstate in his own remarks at today’s briefing:

In upstate New York, economic growth has generally been modest, with job growth running well below the national pace. This isn’t new, as upstate New York has historically tended to grow much more slowly than the nation. Though growth has been slow for the region as a whole, some places are doing relatively better than others. In particular, job growth has picked up in Buffalo, and the Capital Region continues to see sturdy growth coupled with significant manufacturing job gains.

However, not all parts of upstate New York are seeing the same degree of economic progress. There has been little to no growth in the center of the state, and Utica and Binghamton continue to see employment declines. Binghamton stands out as being particularly challenged, as its economy has yet to see any meaningful recovery from the Great Recession. Steep manufacturing job losses have weighed heavily on the area, though these losses appear to be nearing an end. I had the opportunity to visit Binghamton earlier this summer, and I was encouraged by what I saw. The region is making serious efforts to boost economic growth, with Binghamton University playing a key role in fostering local business activity. And, like many places dealing with steep manufacturing job losses, there is a large swath of displaced workers that need assistance returning to the labor market. This has proved challenging and remains a priority.

Which perhaps goes to show that, if you’re a regional Fed president, you need to find something positive to say about event the bleakest situation.

As Dudley did not point out, the challenge of returning displaced workers to the labor market in the Binghamton area hasn’t been made any easier by Cuomo administration policies such as the recent denial of a needed water permit for a natural gas pipeline bringing Pennsylvania shale gas to much of the Southern Tier and points east of upstate New York. Indeed, a shortage of accessible natural gas threatens to cause more manufacturing losses in the region, where the state has banned shale gas production via high-pressure hydraulic hydrofracturing.