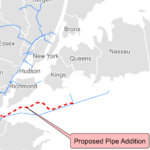 Governor Andrew Cuomo is threatening to yank the license of a major downstate natural gas supplier—because he doesn’t like how the company responded to his refusal to permit a new supply pipeline.

Cuomo today announced he had sent National Grid a letter with this opening:

“This letter is to give you 14 days notice of my intention to have New York State move to revoke National Grid’s certificate to operate its downstate gas franchise.”

In effect, he’s asserting personal authority, as governor, to use the state’s regulatory powers to force a private company to surrender its physical infrastructure and turn its customers over to another business. In so doing, he’s shattering any remaining illusion that New York’s utility regulator, the state Public Service Commission, is acting independently.

The governor’s actions follow National Grid’s refusal to connect new customers amid uncertainty about gas supply after Cuomo’s Department of Environmental Conservation refused to issue required permits for a 24-mile pipeline planned to serve Long Island. (It was a maneuver DEC has used to block other pipelines).

The company’s decision has thwarted business openings and other construction projects in New York City and Long Island, with more than 3,000 requests for new connections or re-connections being denied. The situation has been so disruptive that the island’s six Democratic state senators called for approving the pipeline.

Meanwhile, in nearby Westchester County, Consolidated Edison also has a moratorium in place. Con Ed, however, played ball with the Cuomo administration by agreeing, among other things, to help promote natural gas alternatives such as heat pumps—and to bring in more natural gas by truck. National Grid, on the other hand, has kept the Cuomo administration on the hot seat by continuing to press for new pipeline infrastructure.

But the people of the State of New York haven’t vested such a power in the governor. Instead, the PSC has been given a statutory duty to make sure monopoly utilities provide “safe and adequate” service and that their rates are “just and reasonable.” That gives the body tremendous power over the state’s electricity, gas, and other utilities—which is why those powers are supposed to be vested in expert professionals at arms’ length from political considerations.

But Cuomo’s fait accompli tone shows he expects the PSC to carry out orders as if he’s telling the Department of Transportation which potholes to fill.

How did we get here? Governor George Pataki pushed the PSC into uncharted territory in the late 1990s. It began making electric utilities collect a tax known as the “system benefits charge,” which would support “public policy initiatives” selected by the Pataki administration. Pataki also had the commission start collecting money to let him subsidize hand-picked renewable energy projects.

Cuomo subsequently stretched these powers in order to:

With little or no objection from the Legislature, before or after control of the Senate moved from Republicans to Democrats, Cuomo’s PSC has been exercising what amounts to legislative powers by taxing New Yorkers and spending the proceeds.

State senators, in particular, have shown little interest in using their power to confirm PSC appointees to demand much even by way of quality. One sitting commissioner, former Sen. James Alesi, was approved by the Senate despite having no education or professional background in law, energy, finance or engineering.

Lawmakers should separately be concerned that the PSC and its subordinate Department of Public Service, both creations of the Legislature, are being distracted from their core mission and are instead accommodating gubernatorial whims.

And while utility issues can be complicated, lawmakers need not look far for experts to guide them in their pursuit of substantive reforms: In July, a group of 15 retired DPS employees, including the PSC’s former chief counsel, penned a letter to commissioners, saying the body had “relinquished its independence” and called for them to stand up to the governor.