New York’s slow growth during the past decade is reflected in newly released Census Bureau data showing that the Empire State ranked 48th out of 50 states in the creation of new housing units from 2000 to 2009.

As illustrated in the chart below, New York State’s housing growth rate of 4.4 percent was just over one-third of the national average of 12.1 percent.  Only Connecticut and Rhode Island created additional housing at a slower rate during this period.  The raw numbers: New York added 337,956 housing units to the stock of just under 7.7 million units counted in the 2000 census. 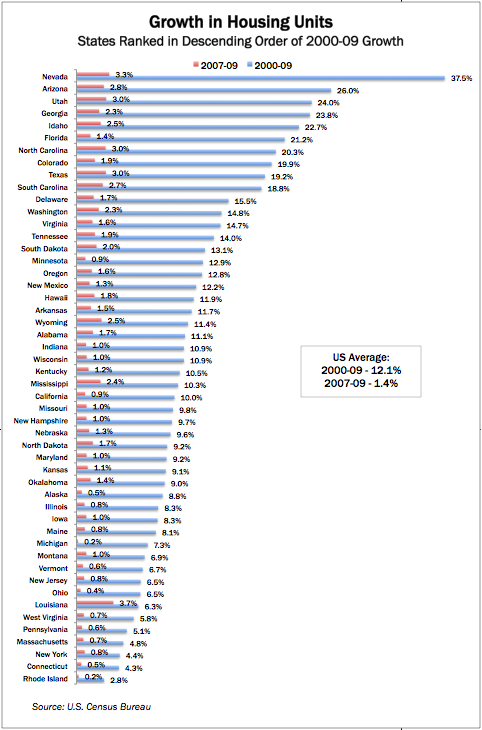 With the bursting of the real estate bubble, of course, the pace of new housing growth slowed down sharply across the country.  Between 2007 and 2009, the national growth rate was 1.4 percent.  In New York during this period, housing units grew by 0.8 percent, which was still slower than in 37 other states.

As shown in the table below, the counties with the fastest growth in housing units in New York were in the suburban and second-home communities of the Catskills and mid-Hudson Valley (Dutchess, Greene, Orange and Sullivan), the upper Hudson Valley (Saratoga and Warren) and rural-suburban Rochester (Ontario).   Richmond County (borough of Staten Island) and New York County (borough of Manhattan) also were well above the state average.  But the other major urban counties — Albany, Erie, Monroe and Onondaga, as well as the Bronx, Brooklyn and Queens — were all below average.  No New York State counties, not even the fastest growing on the list, were able to match the 12.1 percent national average. 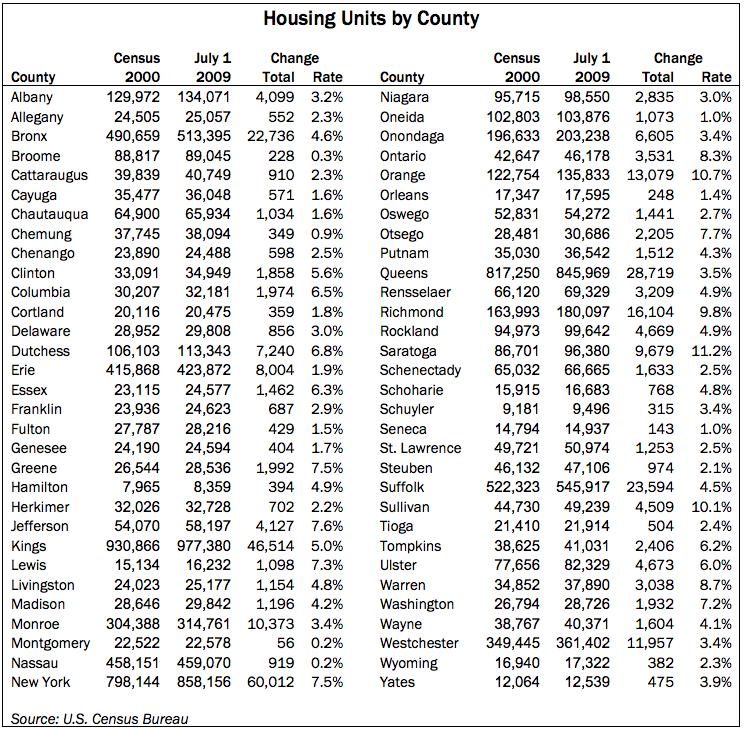 Nassau County had the lowest housing growth rate in the state — a pitiful 0.20 percent between 2000-09, even worse than the 0.25 percent housing unit increase in struggling, low-income Montgomery County in the Mohawk Valley.  In fact, only four large counties in the entire nation had lower rates of housing unit growth than Nassau County between 2000 and 2009.   Nassau’s growth rate ranked 231 among 235 counties that had at least 100,000 housing units at the start of the decade.  Two of the counties with lower rates were in hurricane-ravaged Lousiana; the other two were Baltimore, Md., and Philadelphia, Pa.

The high cost of housing is a frequent subject of complaint and concern among Long Island residents and elected officials.  But until more is actually built in the region, especially in Nassau County, affordable housing for all income levels will remain in short supply.