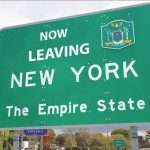 The lead editorial in today’s Wall Street Journal highlights the role that high taxes have played in driving the outflow New Yorkers to other states.

Marginal tax rates matter, as the Journal points out. Unfortunately, to support this, the editorial relies a bit too much on migration data produced by the Internal Revenue Service (IRS), which tracks the movement of taxpayers among the 50 states.

The IRS figures reflect the number of income tax filers (and their dependent exemptions) leaving and moving into each state from one year to the next. The data also measure the aggregate adjusted gross incomes (AGIs) of movers, broken down into income classes.

The Journal assumes that the difference between the two numbers equates to a “movement” of income as well as people. From a prior NYTorch blog post, here’s the problem with that approach:

Retirees and wealthy households—a relatively small minority of New York movers—are the exceptions to this rule.  Social Security checks, pensions and retirement savings accounts are portable.  So are investments, capital gains, and dividends, (which poses a growing problem for a state’s tax base heavily dependent on the top 1 percent). A very small group of high-income professionals, such as financial advisors, can also effectively take their clients with them. But everyone else will be willing to move only if they have jobs waiting for them in their new home state—and, in the case of homeowners, buyers for their houses back in New York.

As noted here a few years ago, the most commonly cited IRS data measure income the year before individuals have moved. But incomes are almost never the same from one year to the next. This is particularly true in the case of young people, whose incomes rise quite substantially once they establish themselves in trades or occupations. Conversely, the incomes of older, end-of-career movers tend to decline.

Ironically, while the IRS data probably overstates the long-term loss of AGI associated with migration, the data most likely significantly understate the migration of wealth away from the Empire State.

To understand why, consider the hypothetical example of a 65-year-old New Yorker—call him Joe Jones—who has spent decades building from scratch a prosperous small business now valued at $30 million, from which he derives $1 million a year of income.

By remaining in New York City, under current law, Jones will subject himself to a combined federal, state and city capital gains tax of 35.14 percent, or $10.5 million on the total gain. He could cut a whopping $3.4 million off that tax bill if he lived in Florida, where the gain would be taxed only at the federal rate of 23.8 percent.

Weighing his options, our Mr. Jones decides to decamp for Boca Raton (where he already owns a winter home)—but only after the move, once he has escaped New York’s tax orbit, does he actually sell the business. The IRS migration data would count Mr. Jones as an outflow of $1 million in income—not of $30 million in capital gains—even though, in retirement, the former New Yorker’s annual income (other than capital gains) is about to drop.

By the way, repeal of the state and local tax deduction would increase the hypothetical Mr. Jones’ all-in tax bill by $408,000, giving him an even stronger incentive to leave.

As the Empire Center has documented, New York State is dangerously over-dependent on taxes generated by a relatively small handful of very high-income taxpayers. As illustrated below, data from the state Department of Taxation and Finance indicate a slow but steady shift of these taxpayers to non-resident status; that is, while they still earn some income from businesses or positions in New York, a growing number of high-income individuals have shifted their assets—and the bulk of their capital gains and dividends income—to other states. 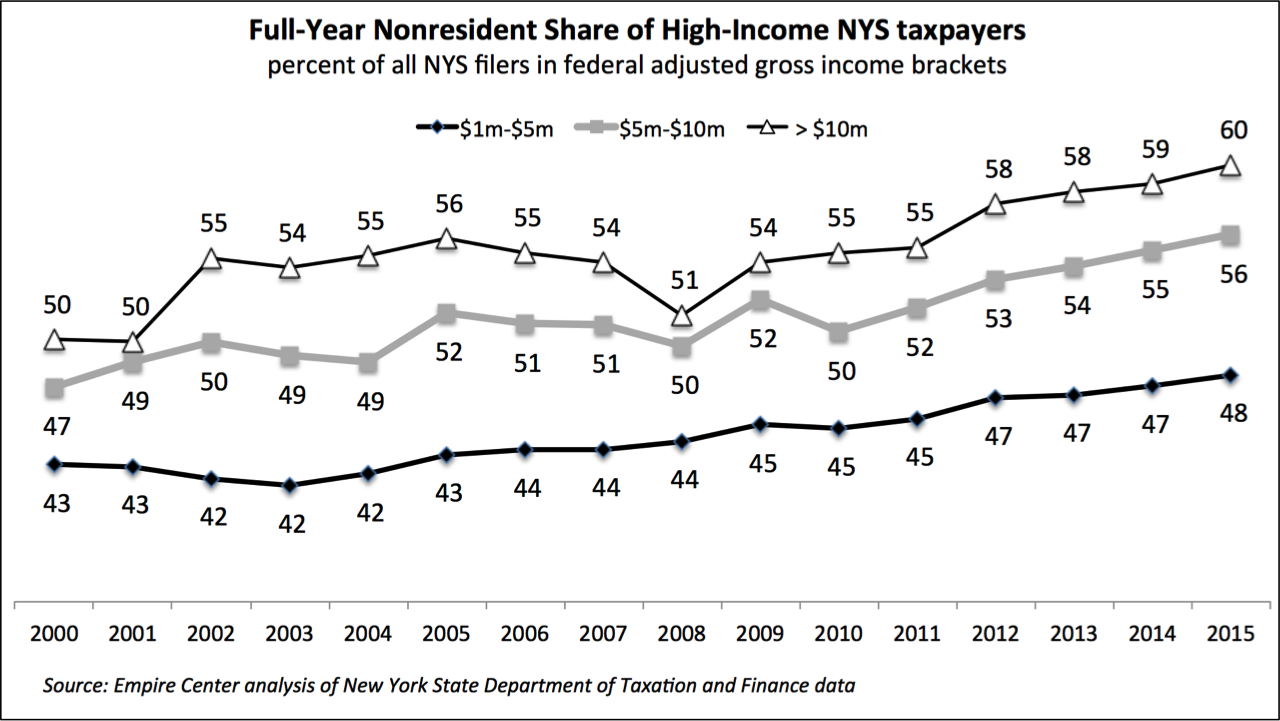 Focus, for a moment, on the tippity-top of the measured income distribution in New York’s personal income tax base.

According to the latest official data from the state tax department, as of 2015 there were 2,531 New York resident personal income tax filers with AGIs of $10 million or more.  They owed state “tax after credits” totaling $6.94 billion, which was 19 percent of the total state income tax paid by all New York residents that year, or roughly 30 percent of state aid to local schools in fiscal 2015.

The taxpayers in this very high bracket had average NYAGI of $33 million, and paid average taxes of $2,741,202. At those levels, if even 10 percent of those households —just 253 filers in all—leave the state, the revenue loss would come to about $694 million.

And repeal of the SALT deduction can only increase the risk of such losses in the future.

Which is why the Journal’s “Great Progressive Tax Escape” is something to worry about.