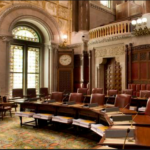 Getting the jump on Governor Andrew’s Cuomo’s budget presentation, the much-diminished state Senate Republican conference today issued a counter-budget plan—which doesn’t even begin to add up.

Lead elements of the “Real Solutions” plan from the Senate GOP minority include “forcefully rejecting new taxes and fees” and “fighting” for a permanent property tax cap as well as a statutory state spending cap.

So far, so fiscally conservative.

But the Senate Republicans—who lost eight seats in the November election, handing Democrats a 40-23 majority*—also are supporting a laundry list of big-ticket items that collectively represent an at least ten-figure impact on the annual state budget, including:

That list represents a budgetary bottom line impact of well over $1 billion without even counting the Medicaid takeover—or the plan’s pledge to reject proposed congestion pricing in New York City while spending more on both rail and highway infrastructure.

To be sure, the Senate Republican infrastructure priorities could be funded by reallocating billions in windfall bank settlement cash that Cuomo (with votes of approval from the former Senate majority) largely has squandered on his pet projects, including economic development. But the “real solutions” plan stints on real specifics.

The only hint of an offsetting pay-for is the promise to dedicate all new state revenues from legalized recreational marijuana sales (estimated by Cuomo at $300 million) to tax relief.

“If” marijuana sales are legalized, that is. The Senate Republicans, as a group, apparently have no unified position on the issue.

Does that Senate pledge to “forcefully reject” tax hikes include Cuomo’s planned extension of the so-called millionaire tax, due to expire at the end of this year?  Conveniently enough, the Senate GOP plan doesn’t answer that question. In fact, without the $4.5 billion raised by the temporary (but repeatedly extended) surtax on high incomes, assuming a 2 percent cap on spending, the state budget could be balanced in the next few years—not counting the added tax cuts the Senate favors, that is.

There are some good ideas in the Senate plan, carried over from past one-house Senate proposals, including requiring a two-thirds supermajority for tax hikes, rejection of legislative Democrats’ single-payer health proposal, a ban on gubernatorial campaign contributions by state contractors, and a pledge to oppose the Cuomo administration’s effort to obliterate the tipped wage.

Unfortunately, there’s also a gaseous promise to “ensure predictable and equitable funding for every region of the state and every school district” (ka-ching!) and to fight against “over-testing of our children.”

And while promising to fight added costly mandates on local governments, the Senate has nothing to say about the main drivers of local costs—collective bargaining provisions such as the Triborough amendment.

No surprise there: throughout their very long and almost-unbroken post-war control of the upper house, Senate Republicans not only failed to reform the Taylor Law—they favored and even spearheaded passage of union-backed proposals to preserve and expand some of the law’s most costly provisions.