In the wake of Tuesday’s school budget votes, 16 school districts around New York must decide whether to call for a second referendum after seeing their original proposals rejected.

Seven of the defeated budgets failed to achieve the required 60 percent supermajority for overriding the cap on property tax levies—which is set at the lesser of 2 percent or the inflation rate, plus excluded amounts that differ by district.

Nine of the rejected budgets called for tax hikes below the cap but nonetheless failed to win approval from a simple majority.

This year will be the latest test of a key and often overlooked provision of the tax cap law, which stipulates that tax levies must be frozen at prior-year levels if a budget fails to win approval from at least a simple majority in two attempts at passage. Prior to this year, only eight budgets have failed to win on the second try; the school board in two other districts (Marlboro and West Valley) decided not to seek a second vote after budgets were rejected in 2013 and 2016, respectively.

The districts with losing budgets are scattered in almost every region of the state, and the circumstances behind those defeats varied. For example: 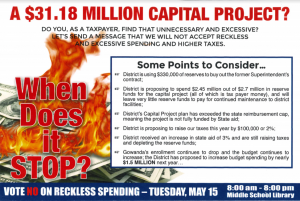 The overall high rate of passage (almost 98 percent), is a reminder that the tax cap is sufficiently flexible to live under, and that it gives local control to override it when warranted. Since the 2012 school budget votes, the cap has acted as an effective speed limit for property tax growth. The cap has slowed the overall rate of increase for school taxes by about two-thirds, even as many districts have exercised their option to override it.

As the Empire Center noted earlier this month, nearly half of school districts (309) proposed budgets hiking taxes to the maximum allowable tax levy, suggesting that the cap has deterred them from spending even more.

School boards have benefited from a recent dip in the contributions they must make to the state Teachers Retirement System. Between 2014-15 and 2016-17, employer contribution rates to the TRS dropped by a full 5.8 percentage points of base salaries—effectively financing the bulk of typical salary hikes granted to teachers during that period. Districts statewide (excluding New York City, which has its own TRS) saw their pension costs drop nearly $800 million. The contribution rate dropped by another 1.9 percent of base salaries for 2017-18, likely saving school districts another $100 million on TRS bills payable this coming fall.

Of course, the tax cap was supposed to be paired with substantive mandate relief to give school boards more flexibility to improve education services and control costs, but state lawmakers have succumbed to union pressure and failed to enact meaningful reforms, especially with respect to pensions and collective bargaining.

Lawmakers, pressed by the same unions thwarting mandate relief, have dabbled in recent years with weakening the tax cap by adding exemptions or by decoupling it from inflation. More extreme proposals have called for letting school districts approve budgets above the cap with simple majority votes—essentially eliminating it, and inviting a return to the days when school tax levies grew an average of 6 percent a year.