The New York State Teachers’ Retirement System (NYSTRS) will reduce its taxpayer-funded pension contribution rates for a third consecutive year in 2017-18, even though the pension fund’s investment returns came in well below its target rate in fiscal 2016.

NYSTRS, which covers all public school teachers and administrators outside New York City, needs to earn 7.5 percent a year to match its actuarial assumptions. However, the $107.5 billion pension fund earned just 2.3 percent last year, actuary Richard Young told the NYSTRS board this week.

During the year ending June 30, NYSTRS actually outperformed some of its larger counterparts—including the New York City pension funds, which earned an average of 1.5 percent, and the California Teachers Retirement System, which reported a return of 1.4 percent. NYSTRS also fell short in fiscal 2015, with a return of 5.2 percent.

Nonetheless, Young told NYSTRS trustees that the teacher pension contribution rate billed to employers as a percent of covered payroll will drop, from 11.72 percent of 2016-17 payrolls to between 9.5 and 10.5 percent of 2017-18 payrolls. This will save participating employers, mainly school districts, up to $300 million. That’s on top of $800 million a year districts have saved from reduced rates over the past two years. Suffice to say, you will not hear this number mentioned much when public school advocates claim the property tax cap is starving them of resources.

The chart below traces the NYSTRS employer contribution rate since the 1981-82 school year, including the projected level for 2017-18. 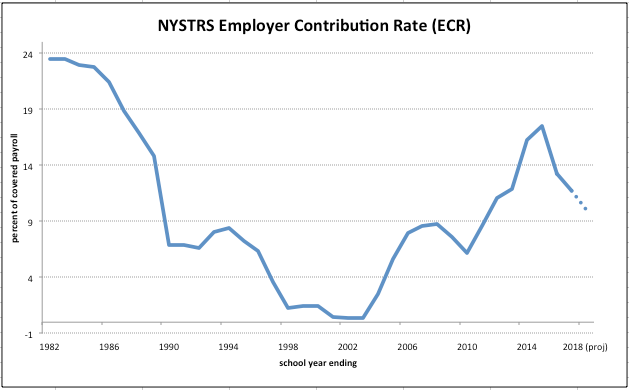 As shown, the rate fell to negligible levels in the 1990s, then spiked after the stock market downturn of 2000-02, then spiked again, at a 28-year high of nearly 18 percent, in 2014-15. This kind of volatility is a feature, not a bug, of the traditional pension system, which guarantees a high level of wage replacement to retired teachers based on optimistic return assumptions rooted in risky investment strategies.

By public-sector standards, NYSTRS is an exceptionally well-funded pension system.  But using the real-world standards favored by a broad consensus of private-sector actuaries, economists and financial experts, it is still underfunded.

As explained here last year, NYSTRS’ seemingly counterintuitive trends of below-target investment returns and dropping pension costs in the short term is a figment of magical accounting rules under which public pension funds operate. While the continuing savings will be real enough in the short term, the NYSTRS contribution rate is actually too low.

The fund’s investment advisors calculate that its current mix of assets, adjusted for risk, will earn 6.6 percent a year, nearly identical to the return predicted by NYSLRS actuaries. That, in fact, is the maximum rate the fund ought to be assuming as the basis for contributions, even if you accept the dubious premise that public funds can be less conservative than private ones because they have taxpayers as a backstop.  But a 6.6 percent assumed rate of return would drive NYSTRS contribution rates back above 20 percent of salaries, a level last seen more than 30 years ago.