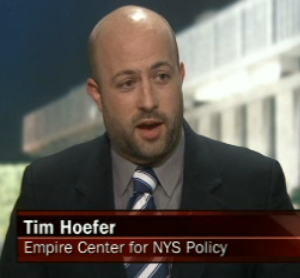 In a landmark case revolving around key provisions of New York’s Freedom of Information Law, the Empire Center is asking the state’s highest court to review lower-court rulings that would enable the New York City Police Pension Fund — and, potentially, the state’s other public pension systems, as well — to keep secret the names of retired employees receiving taxpayer-guaranteed pension benefits.

The motion filed with the state Court of Appeals by the Empire Center, which has posted searchable databases of salary and pension data on its SeeThroughNY transparency website, has been supported in an amicus brief by the state’s leading media organizations, including The New York Times, the New York Post, the Daily News, Newsday, Hearst Corp., the Albany Times Union and Gannett Co.

Tim Hoefer, director of the Empire Center, discussed the case with Liz Benjamin on YNN’s “Capital Tonight” on Thursday. View the interview here.