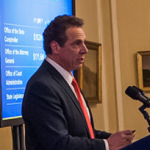 The September cash report from the state comptroller’s office—an important indicator of New York’s fiscal health at the halfway mark of the fiscal year—highlights growing budgetary worries for Governor Cuomo and (ultimately) the Legislature.

The report showed that total state tax receipts through September 30 had come in $387 million below the level projected for that period in the First Quarterly Update issued in July—which itself reflected a $1.6 billion downward adjustment from the cash flow projection in the Executive Budget presented by Cuomo in January.

The weakness is concentrated in personal income tax (PIT) receipts, which are about $371 million below the July projection. In fact, through September, PIT receipts had fallen about $100 million below the amount collected as of a year earlier.

The PIT shortfall was concentrated in the category of estimated payments, due quarterly from high-income residents and self-employed business owners—including most of the highest-earning 1 percent of New York taxpayers, who bear 42 percent of the total income tax burden. Estimated payments through September were $715 million below the level of a year ago—a trend which, if it continues, spells real trouble for Albany. (More encouragingly, withholding taxes—based on salary income for the vast majority of workers—were up $762 million, or 4.8 percent.)

So, what’s going on with the state personal income tax—which accounts for about two-thirds of all tax revenues?

In its financial plan narratives, the DOB suggested high-income earners were delaying some profit-taking and bonus-claiming (including the exercise of stock options) in anticipation of the new Trump administration’s plans for a big federal tax cut, effective as soon as 2019.

There are two problems with this analysis, however. In the past, the biggest income-timing shifts among high-income households have been associated with impending changes in capital gains tax rates. But capital gains tax cuts aren’t, and haven’t been, on the table in D.C. at all this year.

Just six months ago, it would have been plausible for wealthy New Yorkers to dream of or even plan on a federal tax cut. More recently, given the inability of congressional Republicans to agree on health care reforms, it’s becoming clear that if Congress can produce a tax reform bill at all, it will quite possibly repeal the state and local tax deduction. Moreover, senior Trump administration officials have strongly hinted there may be no reduction in tax rates in the highest brackets.

The biggest potential business tax cut benefiting a large chunk of wealthy New Yorkers—a reduction in tax rates for owners of pass-through entities—is the least likely of the proposed Trump reforms to be enacted any time soon.

Bottom line: high-rolling New Yorkers keeping any earned income parked on the sidelines would be better off raking in the money now, while New York’s steep tax rates are at least still (almost) fully deductible from federal taxes.

It’s possible—just possible—that the weakness in personal income tax receipts reflects a more fundamental weakness in the economy, and perhaps an accelerated movement of high-income households to other states.

All of this is quite apart from the likely budgetary impact of various proposed reductions in federal health care spending, which Cuomo has been hyping for a month now. The full impact, reaching into billions, is difficult to estimate.

Cuomo’s recent talk of a “$4 billion deficit” apparently refers to DOB’s July projection of a $4 billion gap between projected revenues and spending in fiscal 2019, which starts next April 1.

Pivoting to a “blame Washington” narrative, the governor apparently has found it politically convenient to embrace traditional budgetary measures he rejected early in his tenure. This is a big change in the rhetorical ground rules he has followed since late 2013.

In the year leading up to his first re-election campaign, Cuomo essentially invented a whole new form of budgetary accounting that figuratively (and, for a time, literally) erased the state’s continuing (but shrinking) structural budget gap.

“We have gone from a $10 billion deficit to a $2 billion surplus in just three short years,” he boasted in his 2014 State of the State message.

That claimed “surplus” was actually a product of creative accounting, based on the governor’s non-binding pledge to hold spending growth to 2 percent a year. Aided by some budgetary gimmickry, the governor through this year has, at least technically, stuck to the 2 percent line—but has also spent any resulting excess cash before it could accumulate into much of a true surplus. Most of the money went for tax cuts (some temporary) and expanded spending on programs such as statewide universal pre-K.

It all culminated in this year’s enactment of Cuomo’s “free” public university tuition program—which, incredibly, was enacted (with little legislative resistance) even as the official long-term financial outlook was beginning to deteriorate. As noted in this space soon after the current budget was finalized in April:

… [T]he final 2018 budget deal added $547 million in spending beyond what Cuomo had proposed, while rejecting $171 million in tax and fee increases he had sought.

That all left the governor with a $2.2 billion hole to fill for the new fiscal year. To close it, the plan shows, he made a series of spending re-estimates and fund transfers—most notably peeling another $461 million from a fat stack of more than $10 billion in windfall cash he’s collected since 2014, thanks to a series of monetary settlements with banks found to have violated various state laws.  (Indeed, another $350 million check just arrived in Albany’s coffers—too late to be noted in today’s report.)

This will bring to $1.3 billion the amount of non-recurring windfall money that Cuomo has used to at least temporarily offset recurring operating expenses over the past four fiscal years, according to a table included in the financial plan update.

The charts below illustrate the deteriorating fiscal outlook as measured by the traditional budget gaps calculation (showing the growth in next year’s gap, from $1.8 billion in April plan to $4 billion in the July plan) and the governor’s alternative measure, assuming spending is held to 2 percent (showing a flip from a $692 million “surplus” as of April to an $841 million gap as of July). These numbers do not reflect any losses attributable to changes in federal health care policy, such as reductions in hospital funding, Medicaid and insurance subsidies.

State Finance Law requires DOB to issue a Mid-Year Financial Plan Update by the end of October—although Cuomo has maintained a perfect record of never releasing the report on time. Whenever the next update comes out, it probably will show a worsening FY 2018 budget gap, and perhaps even a true potential deficit for the current year—depending on whether Cuomo forces a post-election special session based on his power to cut spending in the wake of big enough drops in federal revenue.

The big questions for the year ahead: Is FY 2018 the year Cuomo abandons his 2 percent spending cap, using federal budget cuts as an excuse? If he does, where will he find the money to pay for higher spending? 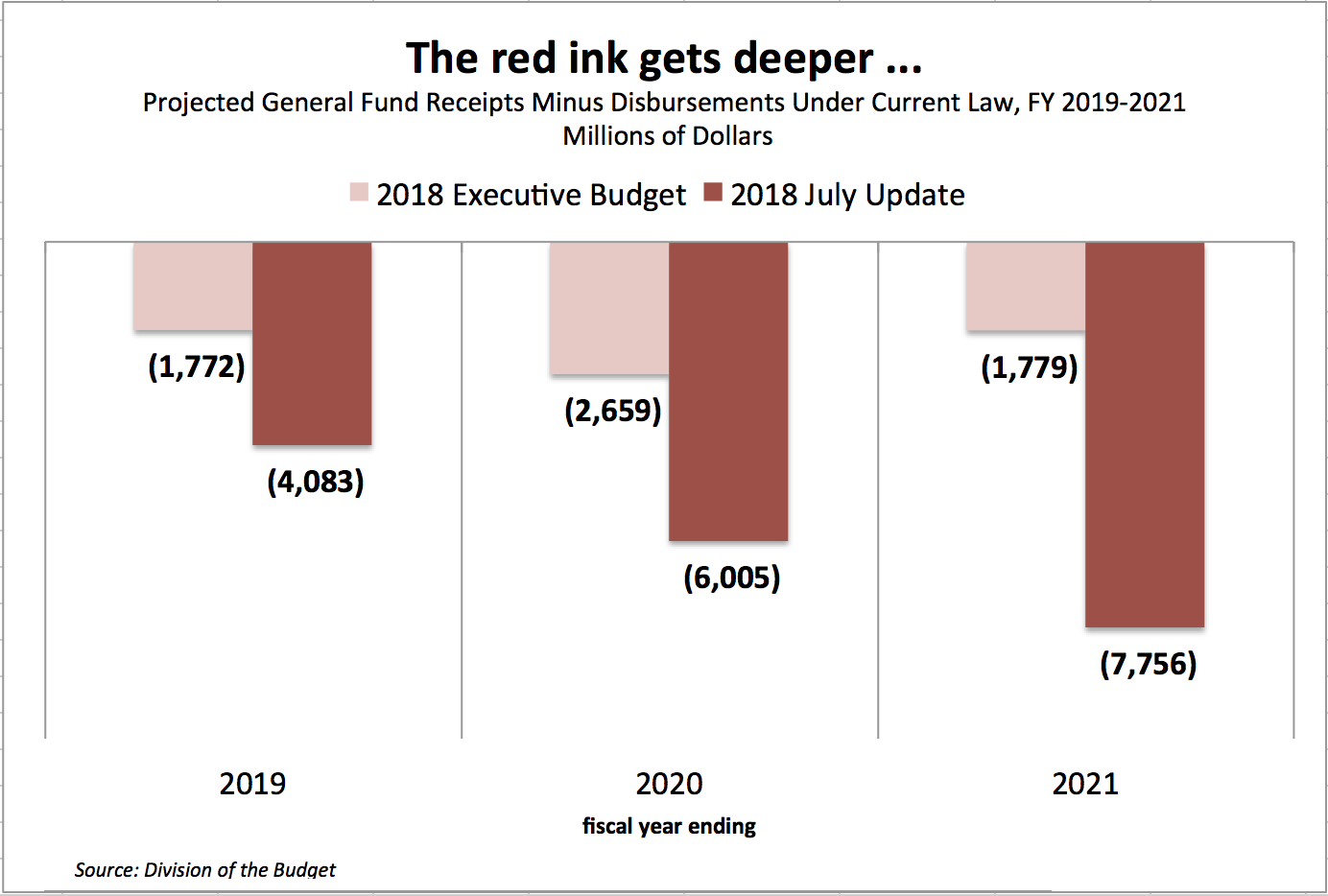 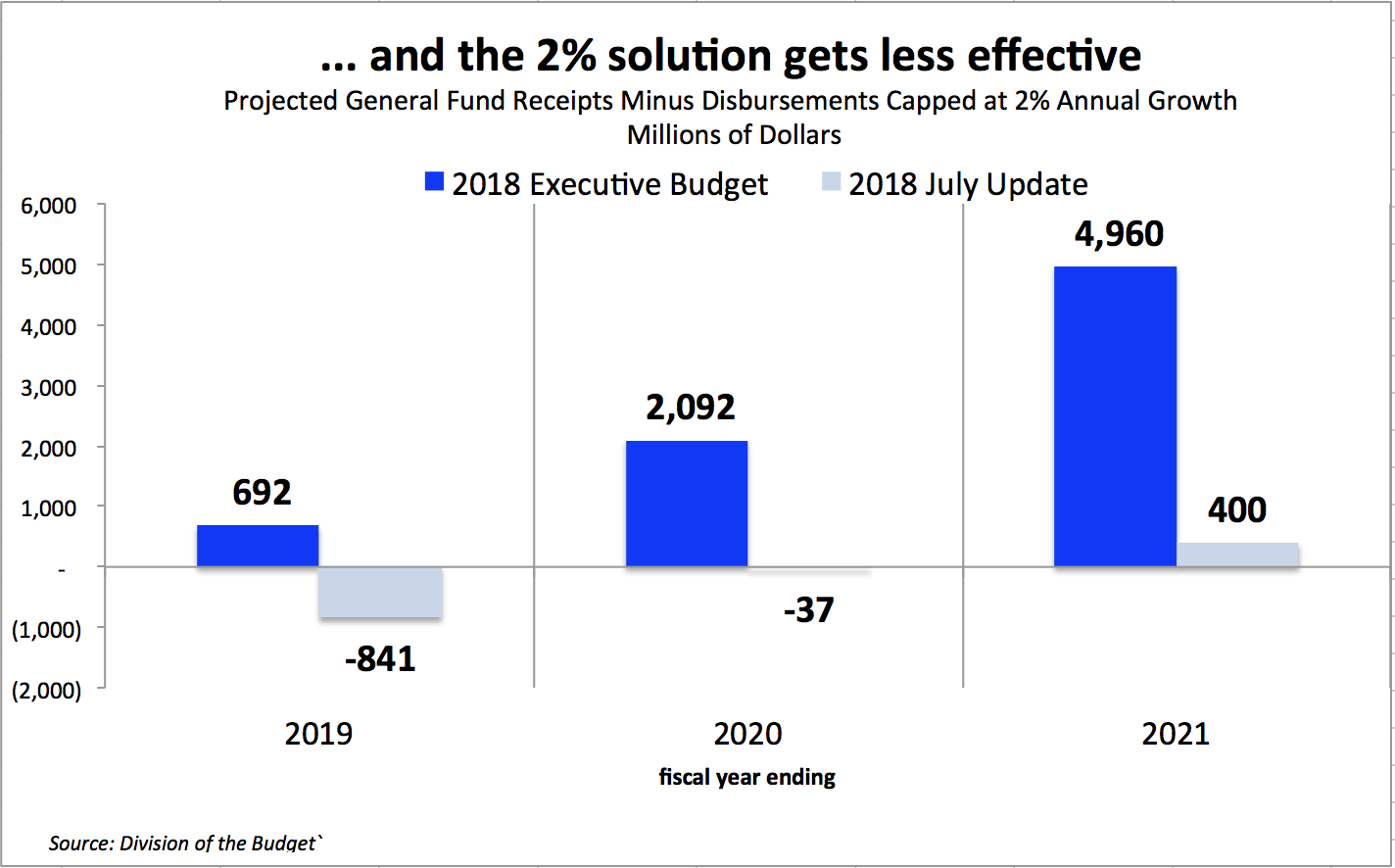