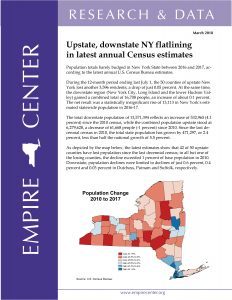 Population totals barely budged in New York State between 2016 and 2017, according to the latest annual U.S. Census Bureau estimates.

During the 12-month period ending last July 1, the 50 counties of upstate New York lost another 3,596 residents, a drop of just 0.05 percent. At the same time, the downstate region (New York City, Long Island and the lower Hudson Valley) gained a combined total of 16,708 people, an increase of about 0.1 percent. The net result was a statistically insignificant rise of 13,113 in New York’s estimated statewide population in 2016-17.

As depicted by the map below, the latest estimates show that 42 of 50 upstate counties have lost population since the last decennial census; in all but one of the losing counties, the decline exceeded 1 percent of base population in 2010. Downstate, population declines were limited to declines of just 0.6 percent, 0.4 percent and 0.03 percent in Dutchess, Putnam and Suffolk, respectively.