In promoting his twin panaceas for the upstate economy—casino gambling and tax-free zones on college and university campuses—Governor Andrew Cuomo hasn’t minced words about the region’s mediocre economic performance. “We’re on the third generation of people giving the speech and writing the story” of upstate’s decline, he said at one recent news conference. 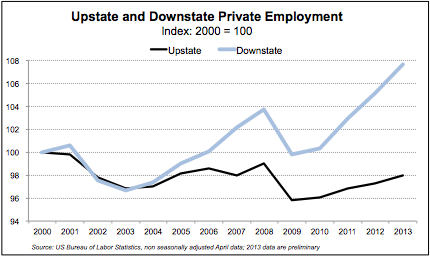 More details on upstate’s poor job creation record can be found in this presentation from yesterday’s Empire Center forum in Albany on “The Upstate Jobs Crisis.”

Cuomo’s proposed solutions are more government programs that promise (but certainly can’t guarantee) better results: tax-free zones and round after round of grants awards by regional economic development councils.  Plus: casino gambling, which will produce generally low-paying jobs that will inevitably divert some revenue from other retail and entertainment venues.

Meanwhile, the governor continues to block natural gas extraction via hydraulic fracturing in the Marcellus Shale region, which would deliver almost immediate benefits for upstate’s weakest regions.  As detailed in this report by Diana Furchtgott-Roth, extrapolating from Pennsylvania’s experience, hydro-fracking would provide a big boost to personal income in some of upstate New York’s poorest counties.