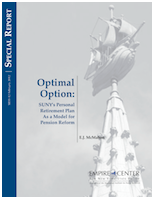 Effective July 1, some newly hired non-union employees of state and local government in New York will be able to opt into the same defined-contribution retirement plan that’s been available for nearly 50 years to faculty and staff of the State University of New York.

The DC alternative, limited to those earning at least $75,000 a year, was the most significant change included in Governor Andrew Cuomo’s Tier 6 pension plan.  Adopted last March, the pension “reform” otherwise extended a same-but-less version of the existing defined-benefit pension plan as the sole retirement option for state and local workers in positions represented by labor unions (whether or not the employees themselves choose to actually join a union).

This change follows a recommendation in the Empire Center’s February 2012 report, “Optimal Option,” which explained the structure and benefits of SUNY plans such as those offered by Teachers Insurance and Annuity Association and College Retirement Equities Fund (TIAA-CREF). The annuity-based SUNY retirement model represents a far better alternative than the defined-contribution proposal in Cuomo’s original Tier 6 plan, which would have made a poorly designed and underfunded 401(k)-style retirement account an alternative to the traditional pension for all workers, unionized as well as non-unionized.

A DC option for all workers was strongly opposed by public employee unions, none more so than the Civil Service Employees Association (CSEA). But after the SUNY-style plan was substituted for non-union workers in the final Tier 6, CSEA complained that the SUNY-style plan created by the final bill was an overly generous “boondoggle.” The New York Daily News called that “breathtaking hypocrisy.”

The state’s official website promoting the defined-contribution option points out that plan offers employees portability, a shorter vesting period, expert management, ability to manage their own investments, and ability to pass benefits to heirs.

But these advantages will remain unavailable to the vast majority of state and local workers–thanks to public employee unions.