Governor Paterson’s Mid-Year Budget Update projects that New York State will lose more than 160,000 jobs during “the current downturn.”   But if history is any guide, that could turn out to be very optimistic.   As illustrated below, the state lost 500,000 private sector jobs in 1990-93, and needed nine years to fully recover to average 1989 employment levels.  Private job losses reached 300,000 during the downturn of 2001-03, and it was six years before employment levels bounced back to the 2000 peak. 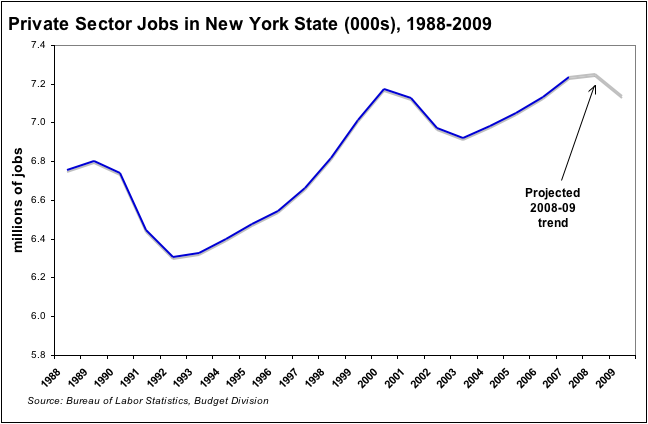 Those previous downturns originated in the financial sector, coinciding with relatively mild national recessions, and their local and regional impacts were exacerbated by significant New York State and New York City tax increases.  But this isn’t just another cyclical (i.e., temporary) downturn.  Quite aside from the challenges posed by a global and national recession, New York’s state and city governments need to reorder priorities and restructure their budgets to reflect the new long-term reality of a leaner, less profitable and more heavily regulated Wall Street.  If state and city officials respond as they did in the early 1990s, the job losses could be more severe and longer-lasting than anything New York has experienced since the Great Depression.