New York lost a net 1.6 million residents to other states between 2000 and 2010, according to 2010 Census data. The domestic migration outflow, coupled with a slowdown in foreign immigration, ensured that New York’s share of the nation’s population continued to slide in the first decade of the 21st century.

But the migration trend is also nothing new.

This paper, first in a series using the latest census data to explore population trends in the Empire State, traces the ebb and flow of migration trends to and from New York in the past 50 years. To fill gaps in the historical statewide data, we rely on a combination of decennial census records, annual population estimates and state vital statistics dating back to 1960. Our findings:

(2010 Census results may be challenged.  See Technical Note on bottom of page 4.)

Immigration to New York from foreign countries peaked at 1.2 million people in the 1990s, balancing out 91 percent of the loss due to the domestic migration of New Yorkers to other states. As a result, New York’s net migration loss in the 1990s was the lowest of any decade in the past 50 years – a total of just 109,000 people. But foreign immigration dropped by 25 percent to a total of just 895,150 in the past decade, reaching the lowest level since the 1960s. As a result, between 2000 and 2010, New York sustained its biggest net migration loss since the 1980s. New York’s foreign-born population, which had risen sharply in the 1980s through the 1990s, increased only slightly in the past decade. As of 2010, New York’s foreign-born population was about 21 percent of the total, second only to California’s 27 percent. 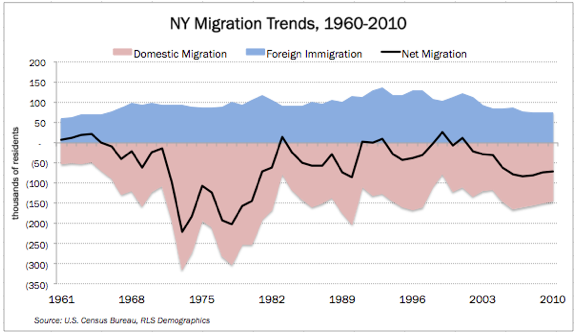 As illustrated above, the 1970s was by far New York’s worst decade in the past 50 years in terms of domestic migration outflows. This was also the first (and so far only) decade on record in which the Empire State’s population actually declined. 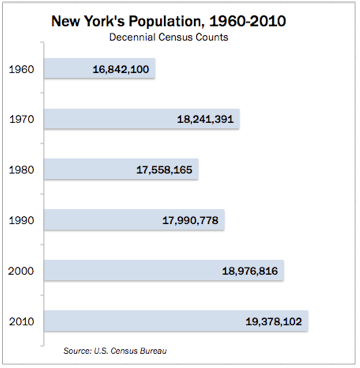 The increase of 2 million people in the state’s total population since 1980, despite the continuing net outflow of residents to the rest of the country, can be attributed mainly to the “natural increase” of births over deaths. But since New York’s population has risen much more slowly than the national average, it has lost 10 congressional seats since 1980, and will lose two more based on 2010 census results. 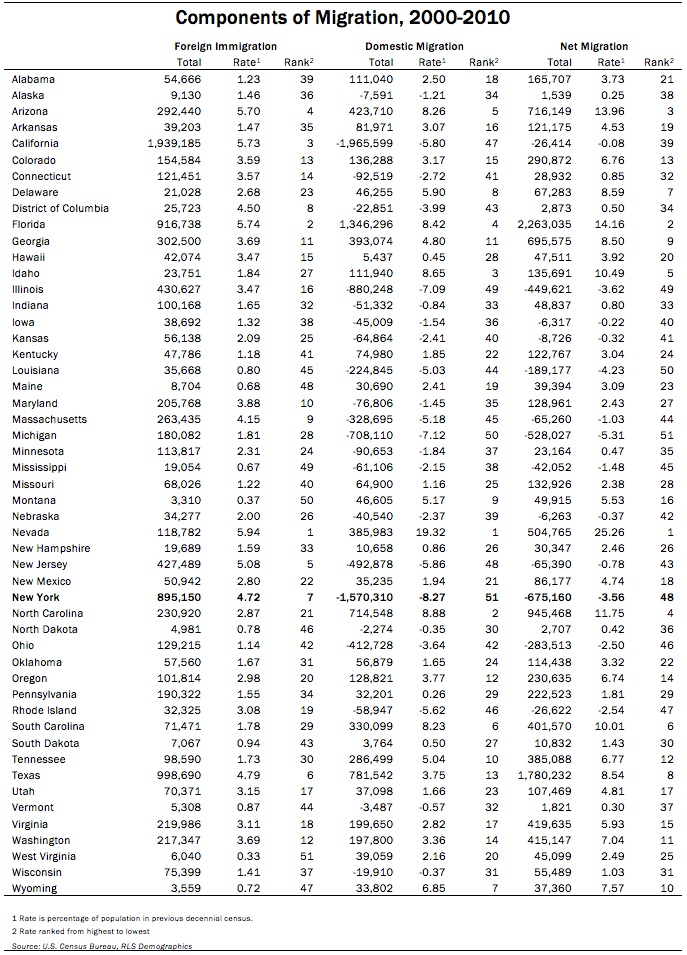 Between 2000 and 2010, as shown in the table on page 3, New York was one of 22 states (plus the District of Columbia) that lost more residents than they gained due to migration within the United States. The domestic migration losers were concentrated in the northeast and Midwest, while the biggest gains were experienced by states in the southeast and west. Exceptions to this pattern included Maine, New Hampshire, and Pennsylvania, all of which gained residents from other states. New York’s loss of nearly 1.6 million residents to domestic migration was equivalent to 8.27 percent of its base population at the start of the period, higher than any state or the District of Columbia. 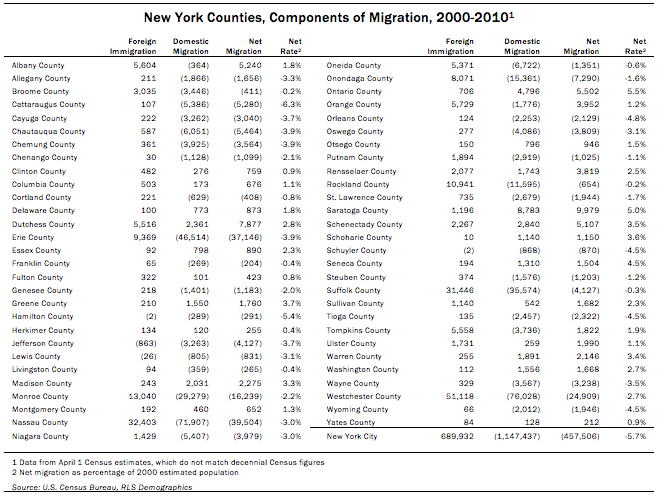 Technical note:  The official 2010 Census results for New York City, which are incorporated in the statewide data cited in this report, were 200,000 below the Census Bureau’s July 2009 estimate.  The Census showed an unexpected increase of 82,000 vacant housing units in New York City, which city officials believe to be inaccurate.  As a result, the city may challenge the figures through the Census Bureau’s Count Question Resolution program. Any addition to the 2010 Census count for the city would have the effect of reducing the net migration total for New York State during the past decade.