As the national economy improved between mid-2013 and 2014, the movement of New Yorkers to other states surged back to pre-recession levels.

During the 12 months ending last July, 153,921 more residents moved out of New York than moved into it from other states, according to the latest U.S. Census Bureau estimates. It was the Empire State’s largest estimated outflow since 2007*, and it brought New York’s estimated net “domestic migration” loss to 462,172 people since 2010, and to 2 million residents since 2000.

New York attracted 118,799 foreign immigrants during the year, second only to California. Thanks in part to a high birth rate among recent immigrants, the Empire State was credited by the Census Bureau with an estimated “natural increase” of 86,353 people, more than any state except California and Texas.

But due to its large net domestic migration loss, New York’s total population of 19,746,227 was up just 0.3 percent, less than half the national rate during the period. As a result, New York for the first time fell to fourth place in the nation’s population rankings behind Florida, which had an estimated total of 19,893,297 residents. Florida had a net domestic migration gain of 138,546 people in the latest 12-month period, bringing its total gain to 438,078 residents since 2010, according to the Census Bureau. Based on previous data trends, many of Florida’s newest residents undoubtedly are former New Yorkers. 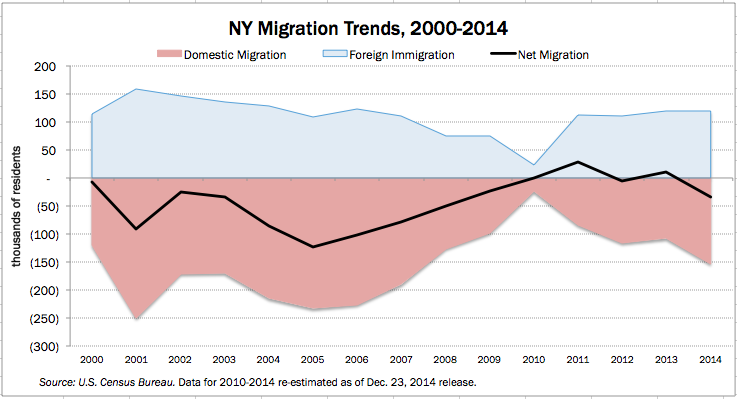 As illustrated by the table below, New York’s net domestic migration loss since 2010 has been the largest of any state’s in both absolute terms and as a percentage of 2010 population. Illinois and New Jersey had the next largest outflows of residents to other states during the four-year period.

* An earlier version of this report, based on an older annual data set for the 2000-09 period, said out-migration from New York in the year ending 7/1/2014 was the highest since 2008. This version reflects updated Census estimates, which show the latest migration total was the highest since 2007. The revised data also are reflected in a revised version of the chart above. 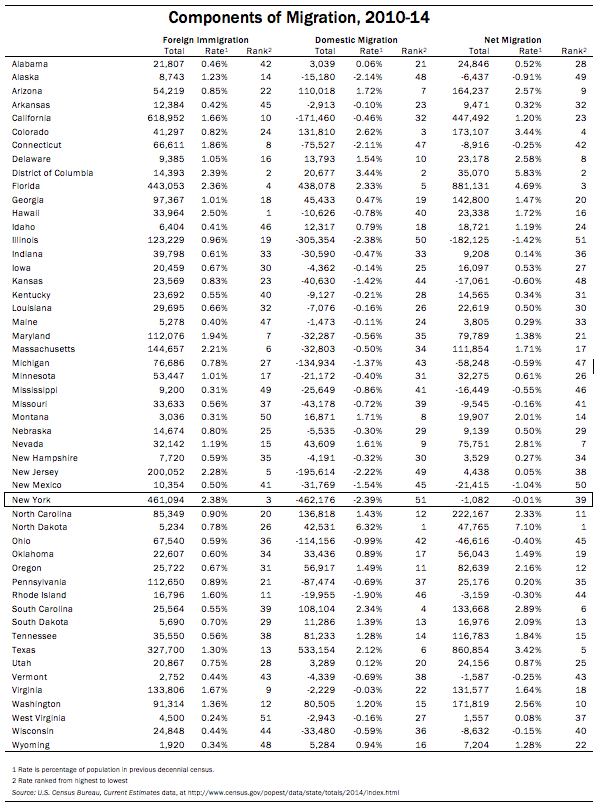