The movement of people in and out of New York over the past two decades, including the combined effects of foreign immigration and domestic migration, has produced significant changes in the Empire State’s age profile.

Based on decennial census data, this paper highlights growing regional differences in the age distribution of New York’s population. Key trends between 1990 and 2010 included the following:

Due to a decline in fertility rates and the aging of the post-World War II baby-boom generation, the nation as a whole got older between 1990 and 2010, as reflected by median age statistics presented in Table 1 (below). New York State got older, too – but with striking regional variations. While the median age of the nation’s population rose 4.3 years between 1990 and 2010, it increased by 1.9 years in New York City, 5.2 years in downstate suburbs, and 6.6 years upstate.

New York lost nearly 2.9 million residents to other states between 1990 and 2010 – the biggest domestic migration outflow, relative to population, of any state during that 20-year period. An influx of foreign immigrants, mainly to New York City and its suburbs, reduced the state’s net migration loss during that period to about 800,000 residents. As a result of these trends, New York’s share of the nation’s population continued to decline.

NOTE: Throughout this paper, “Downstate Suburbs” refers to the counties of the lower Hudson Valley and Long Island: Dutchess, Orange, Putnam, Rockland, Westchester, Nassau and Suffolk. “Upstate” refers to all counties north of that region. “New York City” refers to the five boroughs only.

Previous reports in this series detailed how many people left New York[1], where they went, and what (in terms of average income) they took with them.[2] This paper addresses another question: who has been leaving New York?

Demographic characteristics such as education, income, race and ethnicity are all important, of course. This report, however, focuses on what is arguably the most vital of statistics: the age of the population.

A state, region or community that attracts young people — and retains them as they build careers, businesses and families — is in a good position to build for the future. In an aging nation, youth is an especially valuable asset. But it is an asset that has been rapidly depleted in some parts of New York, as shown by the charts and tables that follow. 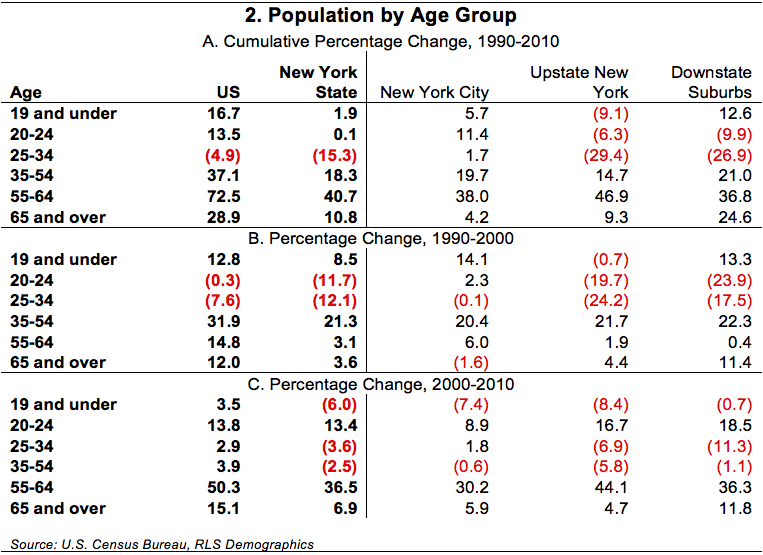 Migration Effects, Before and After

The charts below compare the age distribution of the U.S. population with the distribution in each of three major regional subdivisions of New York as measured by the decennial U.S. Census 20 years apart, in 1990 and 2010. If the age distribution in New York and the U.S. had remained unchanged during this period, the charts would be identical. Instead, notable differences developed—reflecting, in New York, the impact of gains from foreign immigration and losses due to net domestic migration. (NOTE: All charts exclude residents above age 70.) 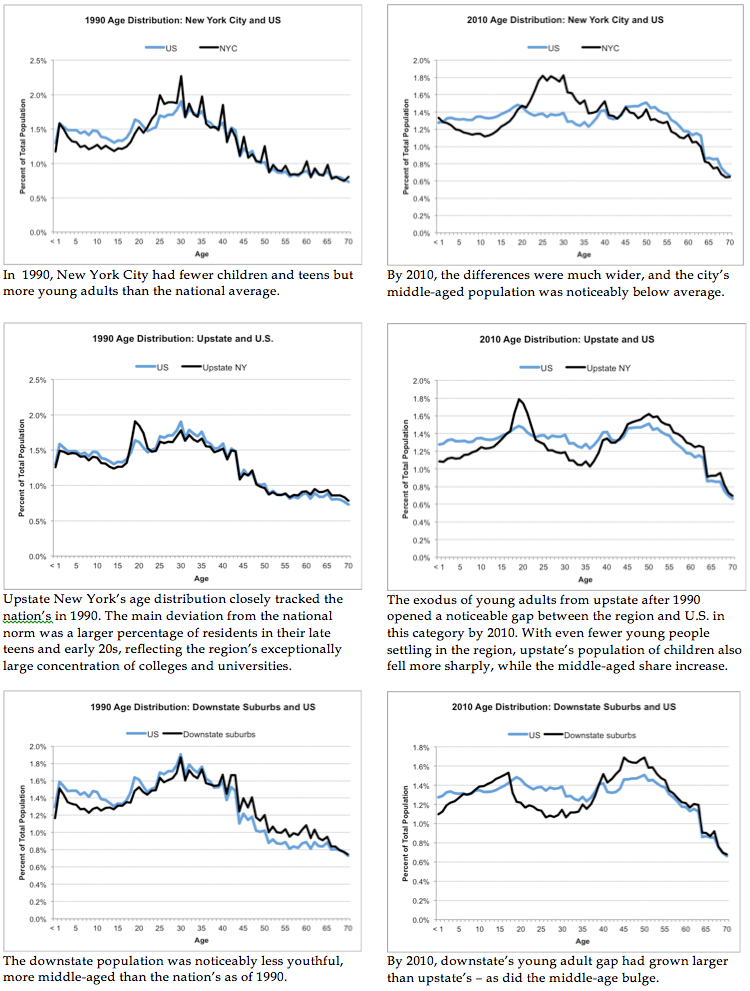 The chart below track changes in the regional populations of New Yorkers who were aged 25 to 34 at the time of each of the last three decennial U.S. Census counts, grouped according to years of birth. Assuming normal mortality rates, an increase in the population of a given age group during the periods shown indicates that more people in that group moved into the region, while a decrease means members of the age group moved away. 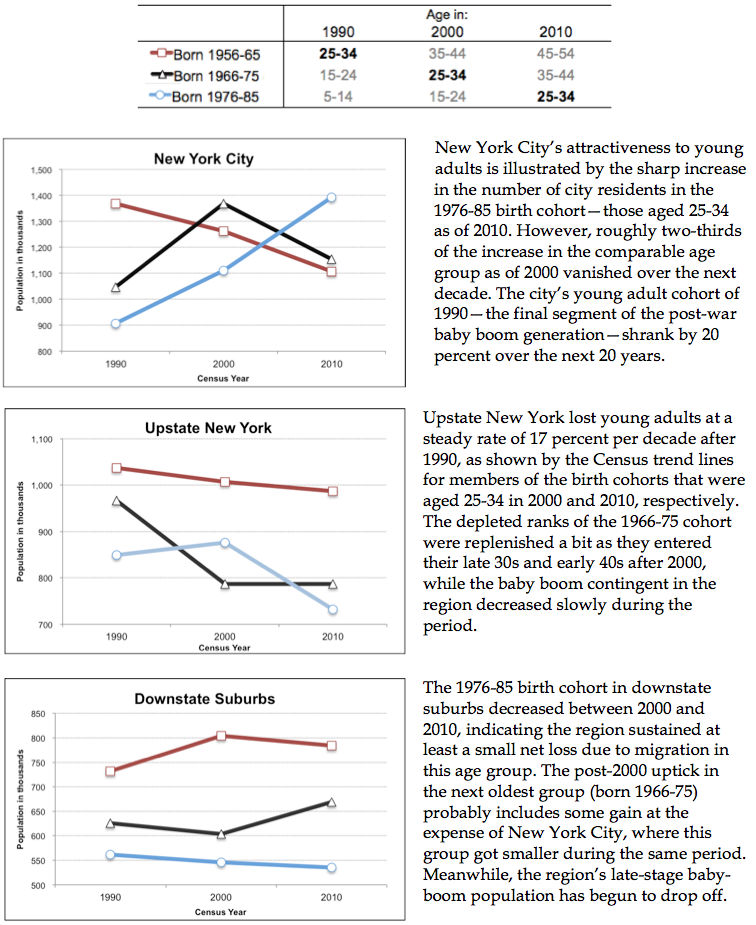 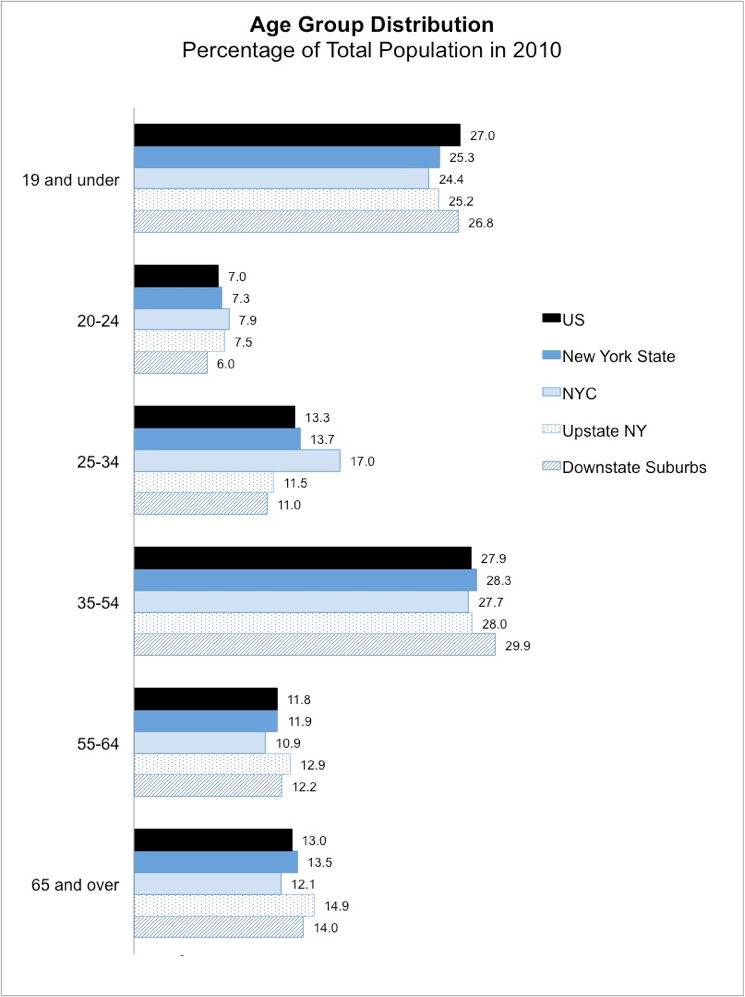 The relative youthfulness of a region’s population is in many ways an important precursor of future economic growth. Unfortunately, with the notable exception of New York City, New York State got older faster than the rest of the country between 1990 and 2010. The graying trend has been especially pronounced in the upstate region—defined, for our purposes, as everything north of the Dutchess and Orange County lines in the mid-Hudson Valley.

In 1990, the median age of upstate residents was just above 33, close to the national median and slightly below the medians for downstate and New York City. By 2010, the upstate median age had risen to 40, and the region’s population included significantly fewer children, teens and young adults than the national average.

Census data indicate that most of the people migrating from upstate New York to other parts of the country between 1990 and 2010 were not retirees fleeing cold winters. Instead, the region’s out-migration loss consisted overwhelmingly of people who were children or young adults at the start of this 20-year period.[3] Presumably, they moved elsewhere in search of economic opportunities their home region was failing to produce. A similarly sharp decrease in young adults occurred in New York’s downstate suburbs – where high housing costs are also a significant factor.

There has been one bright spot in this picture. Reversing the trend of the previous decade, upstate actually gained nearly 70,000 residents in the 20-24 age bracket from 2000 to 2010 – a nearly 17 percent jump, which was significantly higher than the rate of increase in either New York City or the nation as a whole. This increase appears to have been due mainly to a surge in undergraduate enrollment at the region’s colleges and universities, which at least temporarily attracted tens of thousands of young people to upstate from other regions and states.

Upstate’s main hope for reversing its long-term decline is to create enough jobs to hold onto more of its recent bumper crop of college graduates. Unfortunately, the early indicators aren’t good. Higher education enrollment is expected to drop by the end of the decade.[4] And while the economy has begun to recover from the recession, the 1.3 percent average annual rate in private sector job growth upstate over the past two years has been less than half the rate of growth during the 1990s—which wasn’t enough to prevent an exodus of young adults during that decade.

Unless the upstate region can somehow attract more young workers and their families, its population of children and young adults will continue to spiral downward. And its future outlook will grow even dimmer.

2. “Outward-Bound New Yorkers: Where They Went, What They Took With Them,” Empire Center Research Bulletin, September 2011, at https://www.empirecenter.org/pb/2011/09/migration2092611.cfm

4. In a 2009 report, the state Education Department projected a nearly 17 percent drop in statewide enrollment in higher education between 2008 and 2019, following a 19 percent gain between 1997 and 2008.  See “An Overview of Higher Education in New York State” at www.highered.nysed.gov/oris/overview.pdf