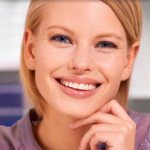 New York’s two-year-old Voluntary Defined Contribution (VDC) retirement plan—the most significant structural reform in Governor Andrew Cuomo’s 2012 Tier 6 pension legislation—is shaping up as a popular alternative among the relatively small number of government employees eligible to sign up for it.

The 580 enrollees in the VDC plan between its opening on July 1, 2013 and June 30, 2015 include at least eight of the 29 state Assembly and state Senate members elected during that period, according to the plan managers at the State University of New York (SUNY). And while SUNY is not releasing the names of enrollees, it appears that the VDC plan was selected by all of the newly elected legislators who were not previously on a state or local payroll, based on official biographies.

Lawmakers in the full-newbie category (i.e., likely to be in the VDC plan) include Assembly members Rodneyse Bichotte, Todd Kaminsky, Roxanne Persaud, Jo Anne Simon, Latrice Walker and Carrie Woerner, and Senators Marc Panepinto and Richard Funke. (Funke, a former Rochester TV newscaster, is the only Republican in the group.)

Unlike their colleagues, elected officials enrolled in the VDC will have no financial incentive to cling to elective office as long as possible in order to “max out” their guaranteed defined-benefit pensions. Nor will they ever have an incentive to “retire” while still in office, double-dipping from salary and pension income, in order in to preserve benefits for their heirs or spouses.

There are not sufficient data available to estimate how many total state and local hires since mid-2013 were actually eligible for the VDC plan. But for the state level alone, the state comptroller’s office has estimated that roughly 140 of 276 eligible employees hired through March 31 of this year had opted into the plan—equating to a take-up rate of just over 50 percent.

Where the enrollees are

The voluntary plan, modeled on SUNY’s popular Optional Retirement Plan and administered by the financial services firm TIAA-CREF, is open to non-union employees hired after July 1, 2013, who earn $75,000 or more a year. The change follows a recommendation in the Empire Center’s February 2012 report, “Optimal Option,” which explains the structure and benefits of SUNY plans.

By definition, this narrowly confines the VDC to two types of employees: political appointees new to government, and various higher-paid professional managers and specialists, such as lawyers, financial analysts, physicians and engineers. The plan also is available to elected officeholders paid more than $75,000 who went on a government payroll for the first time after July 1, 2013.

SUNY and City University of New York employees have been able to choose a defined-contribution (DC) plan for more than 50 years, and large majorities of faculty members have done so. Such plans also have become the norm through the private sector. However, the New York State VDC plan adopted with Tier 6 marked the first time such a plan has been available to any group of government employees outside SUNY and CUNY.

The vast majority of public employees still have no choice but to sign up for a standard DB public pension. From an employees’ perspective, the VDC plan’s major disadvantage is that it does not “define” a schedule of benefits absolutely guaranteed by the state Constitution. (This is a positive for employers, because contributions are absolutely predictable, and for taxpayers, because they are not exposed to the open-ended financial risks of the DB system.)

However, the VDC plan also has several significant advantages: members vest in a year, compared to 10 years years for any current DB pension plan; they can control their own investment profile with the advice of experts; and the DC plan is portable, meaning it follows employees when they change jobs in the public or private sectors, in or out of New York. Employee contributions are pegged at the same levels as the Tier 6 plan—ranging from 4.5 percent to 6 percent of salary, depending on total annual wages. The employer share is a flat 8 percent, which is roughly equal to the predicted, theoretical “normal” rate for Tier 6 but about 10 percentage points less than the current average rate for all New York State Employee Retirement System (NYSERS) members.

Unsurprisingly, as shown in the table below, the agencies with the most enrollees are public authorities, such as the Port Authority and Metropolitan Transportation Authority, and other agencies most likely to hire higher-salaried professionals and technicians who have significant private-sector experience. 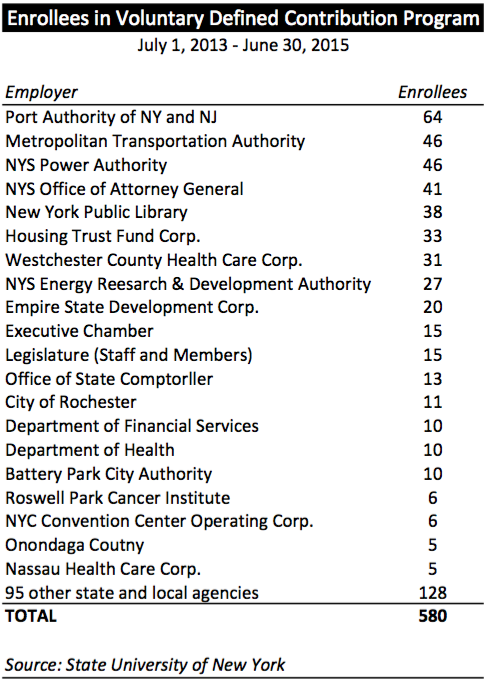 Note: among state government agencies, the Attorney General’s office has had the most VDC enrollees with 41, followed by the Executive Chamber—i.e., Cuomo’s own office—with 15. Ironically enough, the VDC also has attracted a handful of new employees in agencies that administer public pension plans, including 13 in the office of the state Comptroller and three in the New York State Teachers Retirement System.

Wrapping up, some observations from a blog we posted on the subject when the VDC was first taking effect:

The annuity-based SUNY retirement model represents a far better alternative than the defined-contribution proposal in Cuomo’s original Tier 6 plan, which would have made a poorly designed and underfunded 401(k)-style retirement account an alternative to the traditional pension for all workers, unionized as well as non-unionized.

A DC option for all workers was strongly opposed by public employee unions, none more so than the Civil Service Employees Association (CSEA). But after the SUNY-style plan was substituted for non-union workers in the final Tier 6, CSEA complained that the SUNY-style plan created by the final bill was an overly generous “boondoggle.” The New York Daily News called that “breathtaking hypocrisy.”

The state’s official website promoting the defined-contribution option points out that plan offers employees portability, a shorter vesting period, expert management, ability to manage their own investments, and ability to pass benefits to heirs.

But these advantages will remain unavailable to the vast majority of state and local workers–thanks to public employee unions.