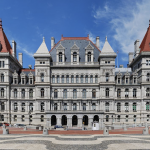 Those were the subjects of the most-read posts on the Empire Center’s NYTorch blog in 2018.

Based on website page views, here is the countdown of the NYTorch Top 10 for the past year.

#10:  Senate set to OK union trap law
Ken Girardin, Jan. 12
Days into the legislative session, a bill designed to make it harder for New York government workers to extricate themselves from labor union membership rolls was poised to move out of a key Senate committee.

#9:  Cuomo’s stealthy boost for 1199
Bill Hammond, Nov. 18
In a replay of the notorious Pataki-Rivera deal of 2002, the Cuomo administration has quietly ordered a multi-billion-dollar Medicaid rate increase for hospitals and nursing homes, with the money earmarked to boost employee pay and benefits.

#7:  Hunting for a new SALT shaker
E.J. McMahon, Jan. 3
Now that the feds have limited the state and local tax (SALT) deduction for individuals, should New York’s no-longer-fully-deductible personal income tax (PIT) be converted into an employer payroll tax?

#6:  NY school spending tops $22k per pupil
E.J. McMahon, May 21
New York surpassed all states with per-pupil elementary and secondary school spending of $22,366 per pupil as of 2016, according to the latest U.S. Census data.

#5:  NY’s leaky gas taxes
E.J. McMahon, Aug. 29
When motorists in New York top off their gas tanks this Labor Day weekend, they’ll be paying an average of about 45 cents per gallon in state and local fuel taxes—the 5th highest total in the nation, and second highest in the Northeast.

#1:  A troubling deal on Fidelis
Bill Hammond, March 31
The largest revenue-raiser in the just-completed state budget, worth $2 billion over four years, is not a tax or a fee or even a legal settlement. It takes the form of semi-voluntary “grants” squeezed mostly out of a Catholic Church-affiliated health insurance plan.