A year ago this week, with the start of New York State’s 2021 fiscal year just over a month away, it became clear that the spread of the coronavirus was about to clobber the global economy, disrupt public finances and upend Governor Cuomo’s original budget calculations.

The collapse of stock prices during the final week of February 2020 was an unmistakable warning that the coronavirus was causing a severe economic disruption. “Coronavirus Fears Reverberate Across World Economy” was a front-page headline in The New York Times on Feb. 29, echoing similar reports across the news spectrum. As the Times reported that day:

“Investors are panicked that the virus is spreading so quickly, with each day threatening to bring more countries to a standstill, that it could severely harm the global economy.”

Given Wall Street’s importance to New York’s tax base, the fall in stock prices was an immediate threat to the state’s biggest revenue source, the personal income tax, which is heavily reliant on capital gains and investment income of the highest-earning taxpayers.

Yet as they headed towards the traditional start of budget negotiations, Governor Cuomo and the Legislature did little to brace for the fiscal impact of COVID-19. Instead, they plowed ahead with spending they knew they couldn’t possibly afford.

Even as he commended the budget’s passage as “an extraordinary feat of legislative accomplishment,” Cuomo estimated that projected spending for the new year totaled $10 billion more than the state expected (at that time) to collect in revenues. Rather than calling on the Legislature to reduce spending, he had negotiated with them behind the scenes to produce a budget that spent not much less than he had proposed, leaving the net total slightly above the previous year’s level. The budget made two concessions to the new reality: it gave the governor extraordinary added authority to reduce spending across the board or to withhold spending in some categories, and it allowed him to borrow up to $11 billion to plug budget holes.

Beyond that, locking himself into the position he’s maintained ever since, Cuomo insisted the federal government would have to fill New York’s budget hole. What’s now lingering is a fiscal hangover the governor and lawmakers expect a forthcoming federal stimulus bill to cure. Assuming the money comes, the relief will only be temporary, leaving the budget high and dry—and unbalanced by billions—in a year or so.

How did we get to this point? The key dates are highlighted on the chart below, followed by links to budget-focused blog posts, special reports and commentaries issued by me and my Empire Center colleagues last year as the crisis was beginning to unfold. 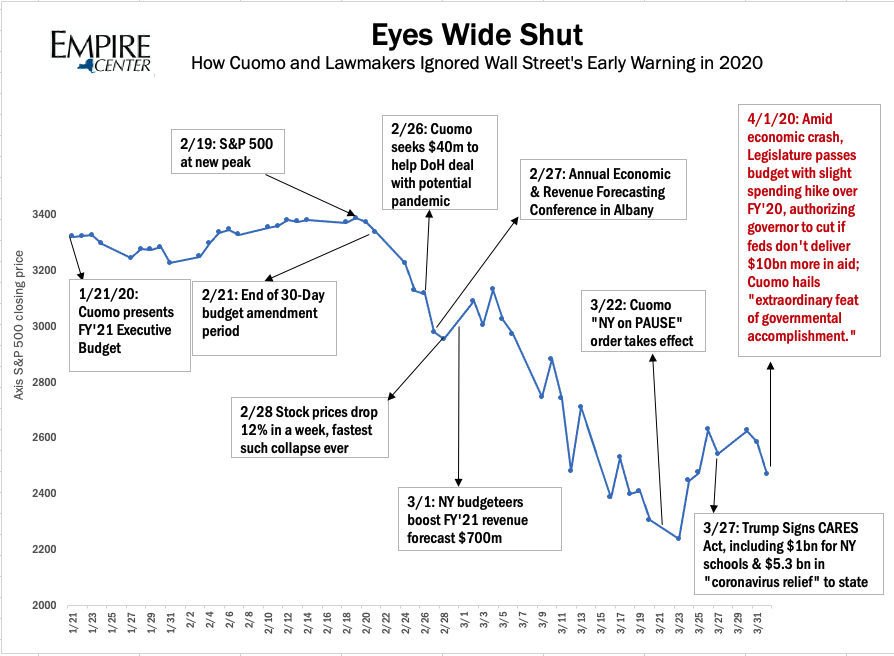 Cuomo’s odd meltdown silence
E.J. McMahon, Blog, Feb. 28
Show SummaryAmid growing fears that a coronavirus pandemic will severely disrupt the global economy, and with the stock market heading for its biggest weekly losses since the 2008 financial crisis, Governor Cuomo has been oddly quiet about the obvious budget implications.

A sunny forecast in cloudy times
E.J. McMahon, Blog, March 2
Show Summary“Hope for the best and prepare for the worst” is a favorite saying of Governor Cuomo, who has rolled it out again to describe how the state will deal with the Coronavirus.

Cuomo (finally) nods to the obvious
E.J. McMahon, Blog, March 10
Show SummaryNot a moment too soon, Governor Cuomo has gotten around to acknowledging that a near-panic in financial markets amid rising fears of a global economic slowdown should prompt a re-set in the state’s revenue forecast for the fiscal year that begins April 1, less than three weeks from now.

The price of procrastination
Bill Hammond, Blog, March 15
Show SummaryAs they struggle to contain the coronavirus outbreak on the eve of their budget deadline, the state’s elected leaders have run out of good options for dealing with Medicaid.

NYS Will Soon Need A Fiscal Ventilator
E.J. McMahon, New York Post, March 16
Show SummaryWith any luck, the coronavirus will be a fading memory by summer. But by then, massive (if temporary) damage will already have been done to the state and regional economies. The Empire State and its local governments, including Gotham, will have to confront a fiscal crisis as intense as the current public-health emergency.

Freeze public-sector wages. Now.
E.J. McMahon, Blog, March 19
Show SummaryNew York will need to make massive budget cuts, and there’s an obvious place to star: Freeze state and local government employee pay. The combined estimated savings for every level of government would come to at least $1.9 billion in the next year.

If only they had listened
E.J. McMahon, Blog, March 20
Show SummaryNew York is going to run out of cash more rapidly than most states—and Governor Cuomo can’t say he wasn’t warned of Albany’s extreme vulnerability on this front.

Are Cuomo’s hands tied on Medicaid?
Bill Hammond, Blog, March 22
Show SummaryIf recent history is any guide, the strings attached to federal coronavirus funding should be less of a problem for New York State than Governor Cuomo seems to think.

NY’s coming capital gains crash
E.J. McMahon, Blog, March 23
Show SummaryAs the old saying goes, the stock market is not the economy—but in New York, it’s an extra-big chunk of the economy, and of the state tax base as well. The ongoing pandemic-driven carnage on Wall Street is a big reason why Albany’s tax receipts are expected to fall at least $7 billion short of Governor Cuomo’s original budget estimate for FY 2021.

How the stimulus bill treats NY
E.J. McMahon, Blog, March 26
Show SummaryThe $2 trillion federal stimulus bill on its way to passage today does not actually shortchange New York in any general sense—but it does dash Governor Cuomo’s vain hopes for a budget bailout, which is why he is so unhappy about it.

NY is shorted on virus relief
Bill Hammond, Blog, March 29
Show SummaryAlthough New York is taking the brunt of the coronavirus pandemic – with 43 percent of the nation’s known cases and 40 percent of the deaths – the state is due to receive only 5 percent of a $150 billion “relief fund” established in Washington.

Taylor Law ties up Covid response
Ken Girardin, Blog, March 30
Show SummaryWhen it comes to responding to the coronavirus, New York is likely to struggle with a pre-existing condition: the Taylor Law. Governor Andrew Cuomo has the authority to suspend portions of the Taylor Law—and to preserve vital public services, he should.

NY’s health taxes add insult to injury
Bill Hammond, New York Post, March 30
Show SummaryNorthern New York farmer Russ Finley is one of the millions of Americans who make do without health insurance. After an injury inducing accident, he stumbled onto one of Albany’s dirtiest little secrets — an addiction to taxing health care, which has gotten steadily worse over the past quarter-century.

Medicaid still needs Fixing
Bill Hammond, Blog, March 30
Show SummaryThe world has changed since Governor Cuomo tasked his Medicaid Redesign Team with finding $2.5 billion in savings to help balance the state budget. Yet even in light of the coronavirus pandemic, many of the panel’s recommendations still make sense – and are arguably more necessary than ever.

The axeman cometh (but not yet)
E.J. McMahon, Blog, April 1
Show SummaryThe coronavirus pandemic has just claimed its first big institutional victim: the New York State Legislature, which handed Governor Cuomo broad and unprecedented leeway to “adjust or reduce” state spending in the fiscal year that began today. Not that lawmakers had much choice. For now, the FY 2021 budget still doesn’t cut spending.

Amid Covid, a shaky state budget
E.J. McMahon and Ken Girardin, April 3
Show SummaryNew York has just enacted a pandemic-crisis budget that might as well have been written in disappearing ink—shakily “balanced” on hopes of a huge federal bailout and ultimately backstopped by the potential for unprecedented deficit borrowing.