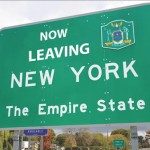 Since 2000, New York has lost more than 2 million residents to other states. This net domestic migration outflow, which dates back to the 1960s, is a major reason why the Empire State has fallen to fourth place in national population rankings, behind California, Texas and Florida.

The Empire Center closely tracks demographic trends, on both a statewide and regional basis, as the ultimate indicator of the state’s attractiveness as a place to live, work and raise a family. Here are links to some of our reports on the subject over the past 10 years:

‘Super-rich’ may balk at NY taxes, but will they walk?

New Yorkers fleeing for Florida more than any other state